Infrasense, Inc. recently evaluated the condition of the “Downtown Las Vegas Viaduct” decks, which carry over 1.5 miles of I-515 in Las Vegas, Nevada. A combination of ground penetrating radar (GPR), infrared thermography (IR), high resolution video, and targeted impact-echo and sounding were carried out to provide a comprehensive assessment of the deck area. 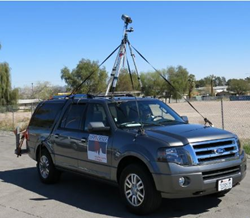 Infrasense, Inc., a national leader in infrastructure nondestructive evaluations, has recently completed GPR, infrared thermography, and high resolution visual surveys of the “Downtown Las Vegas Viaduct” decks, which carry over 1.5 miles of I-515. The surveys were carried out at driving speed, so no lane closures were required and the traveling public was not interrupted. Condition data was collected for the entire viaduct deck area, including 6 merging ramps, in just 2 days, which is significantly more efficient than using traditional inspection methods such as sounding.

Ground penetrating radar (GPR) data is collected at highway speeds, making it the fastest NDE technology for estimating rebar depth, corrosion conditions, and deteriorated concrete. The GPR data is collected in a series of lines spaced 3 feet transversely across the width of the deck, with each line representing a cross sectional slice of the deck at a particular offset. Decks in good condition consist of strong and uniform radar reflections from the top mat of rebar and bottom of the deck. GPR data with weak and inconsistent reflections is indicative of concrete deterioration.

Infrared thermography (IR) data is collected in a series of passes across each deck, with each pass covering a deck width of between 12 and 15 feet. Surveys are performed at normal driving speeds to prevent lane closures and traffic disruptions. During the survey, regular visual data is collected synchronously with the infrared data, so that surface features such as staining, patching, and spalling can be mapped and differentiated from thermal anomalies associated with subsurface delamination.

About Infrasense, Inc.
Since 1987, Infrasense, Inc. has applied state-of-the-art technologies to address the most difficult challenges in subsurface scanning. Infrasense’s engineers are able to nondestructively extract critical information from a diverse range of structures. In addition to providing ongoing subsurface evaluation services to clients across the country, the firm has also conducted numerous research programs to advance the field of subsurface detection and non-destructive evaluation.