By using real words and a universal Twitter emojis children will learn to recognize a visual language that can be used outside of their AAC app as well. 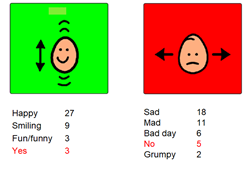 The results are in from our informal straw poll of neurotypical parents, teachers, and students: These symbols can be confusing!

Most communication systems for people with autism use visual symbols. When learning how to use words, pictures are vital supports. They’re consistent physical images that don’t fade away after a moment, unlike the spoken word, but for language to have real value, it has to be universally recognized. To give children with autism the best chance to communicate with as many people as possible, they need to learn how to use standardized symbols that are widely recognized outside their inner circle.

That’s why leading AAC apps such as InnerVoice have chosen to update. InnerVoice will be replacing all symbols that represent emotions (such as anger) or concrete nouns (such as pizza) with universally recognizable Twitter emojis.

With over 145 million people using Twitter daily — and more than 10 billion emojis being sent every day online — teaching AAC users to recognize a visual language that can be used outside of an app as well! And, with Twitter's customizable hair and skin color, emojis give users a better chance to represent themselves using avatars they identify with.

What about symbols for abstract concepts?

Learning to express concepts that are more abstract, such as “again,” “help,” and “more,” is an essential part of language acquisition. Speech therapists will often target the words “yes” and “no” when first working with a child. These two small words can give a kid the power to express their wants and frustrations at last.

Classic communication aids employ symbols like smiling & frowning to represent “yes” and “no,” accompanied by the corresponding word.

On the left, a smiling face with some curved lines and vertical arrows, and on the right, an unsmiling face with some horizontal arrows (see illustration). There’s actually a fair amount of abstract meaning to decode within each image, particularly considering these symbols are widely used with individuals on the autism spectrum — generally known to struggle with ambiguous information.

These icons also force an unnecessary, and at times absurd, association with a particular emotion, to give a simple yes/no answer. Take, for example: “Did you get a flat tire today?” or “Does your stomach hurt?” These are seemingly easy questions to answer; however, using the common symbols for “yes” and “no,” there seems to be no accurate response. We have essentially set non-verbal children up for failure, but what do neurotypical thinkers make of these symbols?

Well, if the words “yes” and “no” are removed from the original icons -- an informal survey of 42 parents, teachers, and students produces inconsistent results (see illustration):

It turned out that without accompanying words, the neurotypical participants didn’t know what the symbols represented either! The images alone are basically visual noise.

For too long, the basic comprehensibility of abstract symbols in AAC systems has gone unquestioned. These symbols might be easily accessible for practitioners and globally used, but they’re rather ambiguous — to everyone! — without the words written alongside them. And as researchers such as Stephen Krashen have noted time and again: In order to learn a language, input needs to be both compelling and comprehensible.

Faced with abstract symbols and written words they haven’t learned to read yet, kids with autism may well favor forms of non-verbal communication. Finding it makes more sense to them in terms of human interaction, but what can be used instead of abstract symbols?

Symbols that represent abstract concepts as-well-as concrete nouns should be uniform and universally recognized. Using words as symbols is a concept that has been gaining momentum over the past few years.

First, stop assuming that non-verbal children can’t learn to recognize words. Words are just patterns. Research studies with children on the autism spectrum has shown, that these kids can learn to recognize these patterns and subsequently learn to read. Given the right tools and expectations, three-year-olds with autism are learning to read, without the use of confusing abstract icons!

That’s why InnerVoice has chosen to update and remove all icons/symbols that represent abstract information. Instead, we will use the written word and universal emojis — or at times GIFs (another widely used form of communication) or short videos — to represent verbs, adjectives, or other action words more clearly.

The importance of expectation

There are still many who question whether non-verbal kids can learn to read, but these children’s cognitive skills may be widely underestimated. Non-verbal children might have sensory challenges and think in ways that are different from neurotypical people, but, like all of us, they need lessons that actually suit their style of learning.

Though abstract icons are still heavily used worldwide, the potential for teaching words as symbols to those with autism is something that has been noticed by other practitioners. For a case study of a teacher who persevered with this method to great success, check out Daniel McNulty’s work with children in Indiana.

It is essential to keep pushing the boundaries of expectation for all the remarkable children with autism around the world. There is hope that through teaching the use of universally accepted symbols — emojis and text — more children will maximize their potential for successful communication.

Microsoft AI for Accessibility Grant• AI for Accessibility is a $25 million, 5-year program aimed at harnessing the power of AI to amplify human capability for the more than one billion people around the world with disabilities. With grants, investments of technology and expertise, grantees