When Raleigh NC homebuilder/inventor Michael Sykes read that the Greenhouse Effect was heating Earth, he thought “Then why can’t it heat our houses?” This led to a 30 year quest to perfect a self-heating / self-cooling house kit, made entirely of renewable materials, to build storm resistant homes with a potential life of a thousand years. The pre-cut, numbered kits by Enertia Building Systems, Inc. result in houses that are so energy and resource efficient, they have been named a Modern Marvel. 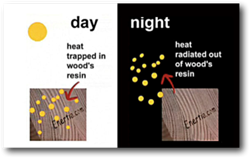 By building the walls with a 8 inch connected “atmosphere,” out of Southern Pine mass timber which stores heat energy in it’s resin, each Enertia® home becomes a miniature earth. The technique is called Biomimicry. The sun heats this artificial climate during the day- the timber releases the heat at night. Cooling is achieved by connecting the “atmosphere” with the underground earth. The renewable material has already absorbed tons of carbon from the air, while growing. Thus a family by building and living in one, can secure their future against violent weather, lack of fuel, and have a carbon negative effect on the environment for the next 20 generations. If they DIY self-build, they can save tons of money now plus avoiding the high-cost of energy in the future.

The lifespan of modern houses has actually gotten shorter with use of materials like particle board, staples, sheetrock and vinyl siding. Most charts show housing’s ecological harm as being the pollution from heating and cooling, but the major harm is when it is landfilled from demolition, or is blown into the air or ocean by a storm. This happens over-and-over again on America's east coast. Enertia® Homes, based on the 1000 year-old mass timber homes in Norway, are hurricane, tornado, fire and earthquake resistant.

Mass timber, once only built in Europe, has finally become accepted in America and Canada - even incorporated into the new building codes. Mass Timber buildings up to 18 stories have already been approved and constructed - based on their superior, yet unintuitive, fire resistance. MT is stronger than steel, weighs less than concrete, and is 100% renewable. It is Carbon Negative, meaning it sequesters tons of absorbed carbon for at least a millennium.

Enertia Building Systems Inc. is the ultimate green-tech, carbon-negative company- each house package out-the-door sequesters 25-50 tons of carbon, and prevents the release of 4 million tons of CO2 in its lifetime. Built from a pre-cut numbered kit, in a time of skilled labor shortage, the Enertia® home is capable of decarbonizing America in it's largest dollar market: rebuilding the single family infrastructure, most of which will need to be replaced in the next fifty years, sooner on the coast and in Midwest river valleys. Enertia® is the only proven, in-production solution that meets the requirements of 100% renewable, fuel and pollution free, traditional-looking, wind, fire, and earthquake resistant, and economical to build. The company plans to license its technology in North America, Europe, and Argentina. Building one may be the most a single family can do to impact, and protect themselves from, climate change now, and extend that massive environmental and financial benefit to their next 20+ generations.

The Meridian Sunspace is useful exciting space as well as being the Engine for the home.Sunspace

Enertia: Energy from a Shift-in-TimeA new clean source of Energy. A new form of Architecture