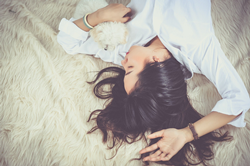 Sleep is necessary for a healthy body, and medical experts know this, which is why they’re working to find ways to help people suffering from sleeping disorders like sleep apnea.

“Deep Cover”, "Event Horizon", and "Platoon" star Laurence Fishburne is lending his skills as host to the educational television show “In Depth”. The "In Depth" series features a wide array of industry experts who discuss a myriad of topics that pertain to people all over the world. An upcoming episode will interview medical professionals about the latest treatments and procedures for sleep apnea.

Sleep apnea is a sleep disorder that triggers a person to begin and stop breathing while sleeping. The condition affects an estimated 22 million Americans. There are three varieties of sleep apnea: central sleep apnea, obstructive sleep apnea, and complex sleep apnea sleep syndrome. If a person with sleep apnea goes without treatment, then they are at risk for developing some severe consequences such as heart disease, high blood pressure, stroke, diabetes, and depression. These can all lead to even more serious health consequences.

As more and more people are becoming sufferers of sleep apnea, medical professionals are creating new and different ways to treat the disorder. Some of these treatments use a tool that monitors breathing and stimulates a nerve to keep the airway open. Another type of treatment involves implanting a device in the body that opens the airway, allowing for normal breathing and peaceful sleeping.

Sleep is necessary for a healthy body, and medical experts know this, which is why they’re working to find ways to help people suffering from sleeping disorders like sleep apnea. “In Depth” with Laurence Fishburne will explore these new treatments on a new episode airing soon.

“In Depth” with Laurence Fishburne is a carefully reviewed informational program before broadcast. The show has accepted a multitude of awards for its endeavors in public television.