In the First Bioinformatics Hackathon, Computer Scientists Meeting in Russia Use their Computer Skills to Fight Deadly Diseases

InSilico Medicine, Inc.: Popularized in the movie “The Social Network”, hackathons are marathon coding festivals where software developers and scientists collaborate, usually to solve a business or software problem. In a 48-hour hackathon in Moscow, computer programmers faced a different challenge – use their computer skills to help find a cure for cancer and other age-related diseases. 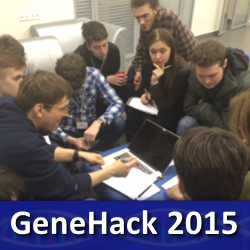 In an intense, caffeine-fueled 48-hour brainstorming session, 100 computer programmers met in Moscow last week to compete in “GeneHack 2015”, a hackathon in which competitors used their computer programming skills to organize, analyze and visualize reams of biological data. Their ultimate goal – leverage their computer skills to unlock the genetic code of deadly diseases like cancer and Alzheimer’s disease and extend the human lifespan.

The event, held at the Moscow Institute of Physics and Technology, was the first international bioinformatics hackathon. The event underscored the amount of computer programming talent available in Russia’s IT industry and the booming growth of bioinformatics, an industry in which computer technology is used to manage and analyze complex biological information. The bioinformatics industry, valued at a $4.2 billion last year is estimated to reach $13.3 billion in value by the end of 2020.

“The fight for top bioinformatics talent is heating up,” said Alex Zhavoronkov, PhD, CEO of InSilico Medicine, Inc., a bioinformatics research company focused on drug discovery and sponsor of the Moscow hackathon. “An event like this gives us a chance to recruit the most talented computer programmers in Russia. These passionate young scientists have exciting new ideas in the field of drug repurposing and aging research.”

The more than 100 young scientists who participated in “GeneHack 2015” were selected from a pool of more than 300 computer scientists. To demonstrate their skills, they competed in 12 challenges, including database development, compilation, gene expression analysis, and cross platform normalization using NVIDIA GPU.

Because of the growing need for bioinformatics researchers worldwide, Insilico Medicine, Inc. has R&D resources in the US, UK, Poland, Israel, Russia and R&D collaborations in Canada, Israel, Switzerland and China.

Until the early 1990s, biology and related fields required very little computer experience. Now, however, the vast amount of data generated from the human genome has made high-powered computer analysis of vast amounts of biological information necessary. Life scientists with an expertise in “Big Data” computer science, and statistics, have the skills needed for a successful career in bioinformatics.

Besides anti-aging research and drug discovery, other fast-growing segments of the bioinformatics industry include personalized medicine, forensic, agriculture, animal science and knowledge management.