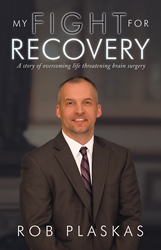 “My story shares how personal tragedy took my life away from me but how I faced the circumstances, embraced my new reality and found courage and strength to reinvent myself and lead a successful new life." - Rob Plaskas

When Rob Plaskas was 17 years old, he was living the life of a normal teenage boy: friendly, funny, athletic and handsome. But there was one major thing that differentiated him from others his age, he had been diagnosed with a benign tumor in the left temporal lobe of his brain and suffered from epileptic seizures. As the tumor grew, he had no choice but to have brain surgery and to say he was scared was an understatement. During the operation Plaskas suffered a brain hemorrhage, losing a massive amount of blood and having to be placed in a medically induced coma. When he awoke, he was left with brain damage similar to a major stroke causing right-side paralysis, severe speech impairment, significant short-term memory loss, and lifelong dependence on anti-seizure medication.

Now at the age of 42, Plaskas is sharing his story of how he beat the odds and has been able to live a successful life. In his memoir, “My Fight for Recovery: A Story of Overcoming Life-Threatening Brain Surgery,” Plaskas chronicles his long journey of recovering from brain injury through hard work, determination and having a positive outlook on his new life. His story provides hope to those going through similar circumstances as he once did as well as the confidence and determination to keep going in life.

“My story shares how personal tragedy took my life away from me but how I faced the circumstances, embraced my new reality and found courage and strength to reinvent myself and lead a successful new life,” said Plaskas.

Plaskas also credits Jesus for saving his life and attends his local Christian church where he is a greeter and is part of a religious support group. His story of hope, recovery and encouragement is one that will resonate with anyone at any time, especially with the current state of the world, to know that it can and will get better. To learn more please visit, http://www.robplaskas.com.

About the Author
Rob Plaskas has worked as a communications analyst for the Illinois General Assembly since 2004, but recently, during his spare time, has pursued opportunities to write about and share his life-long story to inspire other people with disabilities and their families. He received his master’s degree in Human Services from the University of Illinois at Springfield and his bachelor’s in Communication Studies from Illinois State University. Plaskas’ goal is to become a motivational speaker to provide hope for people facing difficult circumstances. He wants to let those in similar circumstances know they can do anything they want if they put their mind to it. He loves other people’s stories about how they succeeded despite their obstacles. Plaskas currently lives in Springfield, Illinois with his lovable and beautiful mixed hound dog Maggie and has a loving family and close friends who care about him and his fight for recovery. When he is not writing you will find him wandering social events and going to wineries. You can continue to follow Plaskas’ journey by joining his Facebook group.