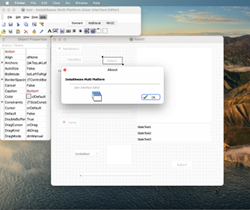 “We’re building on the shoulders of giants,” says Sinan Karaca, Founder of InstallAware Software. “Our existing Windows-native Delphi code forms are porting virtually seamlessly to macOS and Linux via the exciting cross platform Lazarus IDE, itself based on the cross platform Free Pascal compiler."

InstallAware Software, the technology leader in software installation, repackaging, and virtualization solutions for application builders and enterprises, has announced InstallAware Multi-Platform, a native code multi-platform application deployment solution shipping later this year; together with a contest showcasing the first pieces of the exciting new multi-platform technology.

In the best tradition of InstallAware, nothing is hard-coded in the new InstallAware Multi-Platform devops platform. Showcasing this capability, InstallAware is launching a week-long contest in four categories:

InstallAware Multi-Platform’s Dialog Designer is available for immediate download at http://www.installaware.com/iampdd.asp and features a rich array of dialog controls to create modern user experiences. Developers create custom dialogs dropping controls on a form, setting their properties (such as button captions) and describing their actions (such as proceeding to the next installer dialog) entirely visually. The dialogs look and feel the same on Linux, macOS, and Windows – all from a single source!

Developers are invited to submit their entries to support at installaware dot com with the subject line “Multi-Platform Dialog Theme.” The winners in all four categories above will be announced immediately upon selection, and shall receive free licenses to the upcoming InstallAware Multi-Platform product.

“We’re building on the shoulders of giants,” says Sinan Karaca, Founder of InstallAware Software. “Our existing Windows-native Delphi code forms are porting virtually seamlessly to macOS and Linux via the exciting cross platform Lazarus IDE, itself based on the cross platform Free Pascal compiler stack. The maturity of both these platforms are enabling our successes in bringing the very best InstallAware has to offer to Linux and macOS today, and an ever-growing number of native platforms tomorrow.”

InstallAware is the objectively proven technology leader in the software installation space (claims are evaluated on the basis of speed, size, stability, and scalability using the native Windows edition of InstallAware), where the valuation of a former pioneer of the industry recently reached as much as US$3 billion, according to https://www.pehub.com/ta-to-make-3x-its-money-on-sale-of-flexera-to-thoma-bravo/.

InstallAware Software, founded in 2003, is the leading Cloud Infrastructure Company with its laser sharp focus on bullet-proof enterprise software deployment. InstallAware has been recognized by multiple awards coming from Microsoft, SDTimes "Leader of the Software Development Industry", Visual Studio Magazine Reader's Choice, ComponentSource, WindowsITPro, among other recognition. InstallAware X13 is available in a free edition for all Visual Studio users and paid editions with prices starting at $329. For a fully functional 14-day trial and more information, visit http://www.installaware.com.

All product and company names herein may be trademarks and/or registered trademarks of their respective owners.