After the success of the recently released Shadow Ritual, Le French Book, a mystery and thriller publisher specialized in translating top titles from France for the US market, is busy working on another title by international best-selling authors Eric Giacometti and Jacques Ravenne. 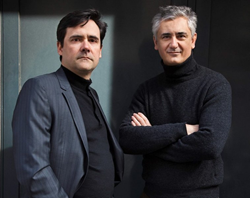 The Freemason and the Reporter

In France, Giacometti and Ravenne, said together in one breath, is synonymous with adrenaline-pumping Freemason thrillers/police procedurals that spend months on the top of the charts every time they come out. The authors Eric Giacometti and Jacques Ravenne have written nine to date, sold over 2 million copies of the series in seventeen different languages, and, rumor has it, are currently holed up somewhere in the French countryside working on the next one.

They recently made their debut on the US market with a very successful title called Shadow Ritual, published by Le French Book. Number 1 bestselling author Douglas Preston called the book, "Phenomenal." Kirkus Reviews says the series has "abundant visceral appeal." Reading Reality gave it "Escape Rating A," while Shelf Awareness specifies, “The plot and pacing of a thriller, but the meticulous attention to historical detail sets it apart.”

The series
The series focuses on a Paris police detective named Antoine Marcas. This character stemmed from long arguments the two authors, friends since they were teenagers, kept having. Eric Giacometti, a reporter, had investigated corruption scandals linked to Freemasons on the French Riviera, while Jacques Ravenne, as a master mason, couldn’t understand why the media was so fierce in its attacks against freemasonry. He felt it was unfair and simplistic. From these often-heated discussions, they created a Freemason cop who is proud of his ideals and values, but aware of the pitfalls of the brotherhood.

The novels give readers an inside view of the brotherhood’s real codes and rituals, and these are genuine and accurate because Jacques Ravenne is a Freemason. He is also a historian. In Shadow Ritual, the plot was inspired by an incredible, yet true story: that of the French Freemason archives stolen by the Nazis in 1940. In 1945, the Russians recovered them in Germany and sent them to KGB headquarters in Moscow, where they remained until 2000, when they were finally returned to France.

The books are called "esoteric mysteries" for fans of Dan Brown, but they are also for fans of, among others, early Robert Ludlum thrillers, and anyone interested in a good story and history. In Shadow Ritual, readers won’t find a single Templar shield, an Illuminati hood, or a descendant of Jesus. Rather, readers discover the esoteric side of Nazism, and the persecutions against Freemasons in Occupied France, by both Nazis and the Vichy government.

There's a lot of fact mixed in with the fiction, and as a bonus the authors provide exclusive content here, revealing Freemason secrets and more.

What's next
Encouraged by the initial sales of Shadow Ritual, Le French Book is busy working on translating another book in the series, which is scheduled to come out in English in early 2016. It holds stories of alchemy and information from unpublished documents about the Statue of Liberty and the Eiffel Tower that the authors uncovered in the Freemason Library at the Grand Orient of France headquarters in Paris.

More about the authors
Jacques Ravenne is a literary scholar who has also written a biography of the Marquis de Sade and edited his letters. He loves to explore the hidden side of major historical events. Eric Giacometti was an investigative reporter for a major French newspaper. He has covered a number of high-profile scandals and has done exhaustive research in the area of freemasonry. Translator Anne Trager has a passion for crime fiction that equals her love of France. After years working in translation, publishing and communications, she founded Le French Book.

About Le French Book
Le French Book (http://www.lefrenchbook.com) is a New York-based publisher that brings France's best mysteries and thrillers to new readers across the English-speaking world. Its motto is: “If we love it, we’ll translate it.”