International best-selling author Ryuho Okawa recounts a miraculous moment from his life - resurrecting from physical death, in his latest book “The New Resurrection”

Can faith and self-determination conquer death? 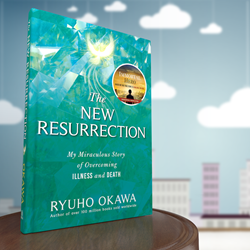 An autobiographical account of Ryuho Okawa's recovery from clinical death and the personal reflections that forged his spiritual mission.

Ryuho Okawa is the founder of the global movement Happy Science, an international bestselling author and has produced numerous movies including "Immortal Hero" which is based on his new book, "The New Resurrection." While Okawa generally writes books that delve into such diverse genres and topics as self-help, geopolitical analysis and spirituality, "The New Resurrection" is unique in that it reveals the autobiographical account of a particularly challenging chapter in the life of the author.

Coinciding with the internationally award-winning film "Immortal Hero" that depicts a dramatized account of the events in question, "The New Resurrection" reveals the personal reflections and observations of Ryuho Okawa in the midst of a near-death experience. According to Okawa, he was not simply near-dead, but, as was conveyed to him and his family by his doctors, was pronounced clinically deceased. Not only had he suffered a heart attack, but his heart had altogether ceased to pump blood.

A miraculous event occurred at that time for Okawa, and due to a combination of self-determination, a sense of purpose, and prayer, he managed not only to survive, but to thrive, in spite of his refusal of medical surgery and insistence of employing alternative methods to healing, despite hospitalization. Okawa's doctors were astonished by the remarkable recovery that he made, and to infer that he defeated impossible odds may be an understatement.

Throughout the period of his recovery, and despite the hopelessness conveyed to him by his doctors and wife at the time, Okawa realized the true nature of his existential purpose; namely, that he was to fulfill a spiritual mission. "The New Resurrection" goes on to outline with great depth the accomplishments which Okawa has underwent from the time of the experience in question, which include authoring over 2,600 publications, giving over 3,000 international lectures, establishing a political party with notable influence in Japan, founding institutions of learning from middle to graduate studies, and a myriad of charitable works. This is undoubtedly an unusual degree of accomplishment to be attained by any person, and Okawa attributes all of it to his faith, perseverance and sense of spiritual purpose.

Skeptics will always doubt the validity of cases such as that of Ryuho Okawa. He is well aware of this, and proposes a union of the spiritual and modern medical fields as an alternative to a purely secular worldview. Many people stricken with illness claim that their faith in God was the single most important factor in their process of healing, even where conventional medicine was employed; the research speaks for itself. Such is not merely a statistical anomaly, but has rather become a standard. Whether you are a skeptic or a person of faith, it is difficult to deny the observable success rate of the power of prayer coupled with perseverance. Doctors, including those who identify as atheist and secular, are frequently willing to acknowledge that the act of prayer helps to facilitate a benevolent state of mind that aids patients in their process of healing and endurance.

Okawa's faith did not merely heal him, but allowed him to go on to heal others and contribute his utmost to humanity. Perhaps such an ideal is what spirituality is ultimately about: the aspiration toward something greater than oneself. "The New Resurrection" is accordingly an inspirational true story that emphasizes the attitude that each of us can assume in life where we have experienced difficulty, be it sickness, trauma or other obstacles. All of us can sublimate our own process of healing toward the benefit of humanity. Each one of us has something to offer to the world, a greater existential purpose of selflessness and altruism. Individuals such as Ryuho Okawa help to set a benevolent example for what is possible within the scope of capability for anyone. Imagine a world where each of us turned our suffering into graciousness and rectitude; such is the world that Okawa envisions and is genuinely worth striving for.

"The New Resurrection" is available at all major bookstores nationwide, including Barnes & Noble and Amazon.