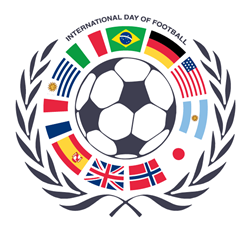 Football unites the world. May it continue to build bridges and bring down walls. - Joseph Peter

“With over 4 billion fans around the world, Association Football is the world’s number one sport.  Football, Soccer, Futbol, Futebol, Calcio, etc, is an unprecedented cultural phenomena, which brings inspired moments of optimism and happiness to more than half the planet"  Joseph Peter stated. “If we are to unite a global consciousness and optimize long term SDG impact, we must leverage the best of pop culture for future generations.  We must build on the most bankable global/local foundations of cultural happiness as a form of creative diplomacy.”

“The common love of sport, football in particular, is a key global/local positive network effect.  It has the potential to maximize positive youth development, enhance gender equality, expand women’s empowerment and unite humanity to minimize the negative network effects of war, conflict and poverty.  As social media and the maturing internet create Vertical P2P networks of global/local connectivity, football exemplifies diplomacy through sport, transcending all borders and boundaries.  It unites all ages, all walks of life through the power only sport can.

Additionally, The two “FIFA Players of the Century” poetically have birthdays exactly seven days apart, the 23rd of October and the 30th of October.  An International Week of Football would ideally start on the 23rd of October with events and celebrations continuing until the 30th, uniting the world football community for a week in honor of its two greatest players of all time!

We call on all 4 billion+ football fans of every nation, color and creed, from every zip code around the world, all professional and amateur players, passionate supporters, dedicated soccer moms, dads, coaches, mentors, as well as all Women’s and Men’s National Teams, Women’s and Men’s Youth National Teams, World Cup Winners and amateur clubs, to recognize the 23rd of October as this new day of celebrating The Beautiful Game, in honor of this unprecedented 3 time World Cup Champion on his birthday. A first draft of this new resolution will combine the first draft of the International Day of Happiness resolution with other UN protocols and precedents like the International Day of Nelson Mandela.

The power and love of football was the foundation of consciousness which led to the creation of The African Book of Happiness during the FIFA World Cup™ Trophy Tour by Coca-Cola in 2009 during its unprecedented 50 nation tour of the magnificent continent of Africa.   This illuminated gospel of positive images was given at the World Cup Final in 2010 by then Chairman and CEO of The Coca-Cola Company to Global CEO's, World Leaders, Stakeholders and VIPs. The day after the World Cup final, a special and moving presentation to Mr Mandela took place by Joseph Peter with his grandsons Ndaba and Kweku in his home along with Somali Artist K’naan.  This campaign continued into 2011 with a feature in the New York Times, “The Pied Piper of Happiness.”  In 2012 a partnership forged with then Ambassador of Iraq to the UN Dr. Hamid Al Bayati, who championed Josephs art, ideas and The African Book of Happiness.  Diverse coalitions were built with Joseph’s network of friends to present The African Book of Happiness to the senior officials of the United Nations inspiring the unanimous support for official adoption of The International Day of Happiness.  Dr. Hamid Al-Bayati of Iraq is the Co-Founder of The International Day of Happiness.

This new campaign to adopt an International Day of Football (also to be known as the International Day of Soccer http://www.internationaldayofsoccer.org) is the first day for Joseph’s Happiness thesis phase II. This thesis includes new world frameworks to strategically digest and creatively fund the SDG’s for the future. It also includes key new days for sports, arts and music, which we believe strengthen pop cultural bonds the United Nations seeks to optimize for SDG17 and engage the 2 Billion global youth.

Joseph Peter is one of the most traveled young Artist/Polymaths in the world. In 2009, he authored/created a photographic study of happiness during the FIFA World Cup™ Trophy Tour by Coca-Cola which covered 50 African nations. Joseph then began Give Happiness, a campaign of using this book in various editions to inspire CEO’s and World Leaders towards a new world vision of Happiness.  After presenting The African Book of Happiness to Nelson Mandela, Joseph used this book to inspire the United Nations with his champion and Co-founder, then Ambassador and Permanent Representative of Iraq to the UN Dr. Hamid Al-Bayati.  The International Day of Happiness was adopted by the United Nations on the 28th of June 2012 by consensus and is celebrated annually on March 20th. The images, video and time of this journey and campaign can be reviewed at http://www.internationadayofhappiness.com. Joseph Peter has been featured in The New York Times, has been a TED Talk speaker and published a commercial edition of The Book of Happiness: Africa with foreward by Ndaba Mandela in 2013 with Random House. He works with several international organizations and non-profit foundations to continue to build on the importance of happiness worldwide.