Two separate teams of WesternU students discovered cases where the cutaneous branch of the obturator nerve (CBO), which usually remains in the thigh, ran into the foot. A few previous reports in the literature describe CBOs passing the knee to innervate portions of the calf, but none show CBOs extending to the ankle and foot. 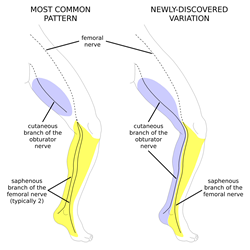 A routine assignment in Western University of Health Sciences’ anatomy lab has resulted in a discovery previously unseen in medical literature, with the findings published today in a prestigious journal.

Two separate teams of WesternU students discovered cases where the cutaneous branch of the obturator nerve (CBO), which usually remains in the thigh, ran into the foot. A few previous reports in the literature describe CBOs passing the knee to innervate portions of the calf, but none show CBOs extending to the ankle and foot.

“Cutaneous Branch of the Obturator Nerve Extending to the Medial Ankle and Foot: A Report of Two Cadaveric Cases,” by Brittany Staples, DPM, Edward Ennedy, DO, Tae Kim DO, Steven Nguyen, DO, Andrew Shore, DO, Thomas Vu, DO, Jonathan Labovitz, DPM, FACFAS, and Mathew Wedel, PhD, was published today, July 23, 2019 in the Journal of Foot & Ankle Surgery. Click here to view the article: https://doi.org/10.1053/j.jfas.2019.03.007.

“Students and faculty from podiatric and osteopathic medicine collaborated interprofessionally on this research, which is contributing new knowledge to the medical community,” said WesternU College of Podiatric Medicine Associate Dean Jonathan Labovitz, DPM, FACFAS, CHCQM, one of the paper’s co-authors. “We are proud of the initiative and skill shown by our students in the anatomy lab and we hope they carry this sense of discovery and teamwork forward as they complete their residencies and begin their careers.”

WesternU students are asked to look for cutaneous nerves during dissection. The cutaneous nerves allow people to feel pain, temperature and touch on the skin. The nerves branch out into fine endings and are difficult to trace.

College of Podiatric Medicine (CPM) graduate Brittany Staples, DPM ’17, was a first-year podiatric medical student at the time in 2013. She asked her faculty adviser, College of Osteopathic Medicine of the Pacific (COMP) Associate Professor Mathew Wedel, PhD, about a nerve running all the way down the ankle, coming out of the inner part of the thigh.

“As first-year medical students, we didn’t really know what to expect. We assumed everything was important,” Staples said. “We were pretty meticulous, trying to expose everything without destroying it.”

“My mind was blown,” Wedel said. “This was something I had never seen.”

Their next step was to research whether this variation had been reported in the medical literature and to ask other WesternU students in the anatomy lab to look for similar cases. The following year, in 2014, a table of COMP students found the same thing – a cutaneous nerve going from the thigh down to the foot.

“We first had to determine if it had previously been acknowledged in medical literature,” Staples said. “We had to scan an excessive amount of old anatomy textbooks. We came across something similar having been discovered, but not to the extent of our discovery.”

Their research uncovered an atlas published in France, which was never published here in the U.S., that showed the nerve going past the knee to the upper part of the calf. And they discovered a 1906 paper by Charles Bardeen on variations of nerves on the lower extremity. Bardeen found CBOs going down past the middle of the calf in a handful of people. He wrote that the cutaneous nerve is extremely difficult to trace because it is so small, and that his statistics were unreliable because a seemingly absent nerve might simply have been too small to find.

“In science, we are standing on the shoulders of giants,” Wedel said. “It is really satisfying to be able to bring Bardeen’s work into the spotlight a little bit. He did all this work cataloging variations in the human body. He is not exactly forgotten, but he is not discussed in medical curriculum. The variations he found are a bit beyond what is normally taught in medical curriculum. If it is not lost information, it is at least a bit hidden. I feel we are paying a karmic debt, finding the work of previous scientists and bringing it back to light.”

“It’s exciting to be able to find something so extraordinary, and I think it bodes well for future anatomic education,” Staples said. “Always be on the lookout for something that may not have been described (in medical literature).”

Students’ care, curiosity and attention to detail made this possible, Wedel said.

“As a teacher, I couldn’t be prouder,” he said. “Students turned a classroom activity into a scientific activity. It was quite a technical feat on their part, to dissect that tiny nerve from the thigh to the foot.”

There is a saying in podiatric medicine, “The patient is the truth.”