To raise awareness and understanding of a population hidden in plain sight, Intersex Activist and Author Hida Viloria and Biological Sciences Professor Maria Nieto PhD announce the release of their new book, ‘The Spectrum of Sex: The Science of Male, Female, and Intersex’ (February 21, 2020). 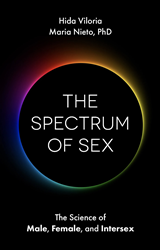 The Spectrum of Sex: The Science of Male, Female and Intersex" by Hida Viloria and Maria Nieto PhD, illustrations by Alex Law

“This extraordinary book needs to be required reading in all medical schools, by parents of intersex infants and everyone who cares about humanity,” explains Cheryl Cohen Greene DHS, Author of “An Intimate Life: Sex, Love, and My Journey as a Surrogate Partner”.

Human Rights Activist Hida Viloria and Biological Sciences Professor Maria Nieto PhD announce the release of their new book: ‘The Spectrum of Sex: The Science of Male, Female, and Intersex’ (February 21, 2020) that explains the true diversity of human sex. This new book informs readers in a clear, scientific manner on the genetic explanations of sex variation, and explains how societies have acknowledged sex diversity for centuries. True stories written by intersex individuals, including award-winning author Thea Hillman, and illustrations by Alex Law, make the book engaging and accessible to all.

“The spectrum is enormous….This is purely biological,” explained Oprah Winfrey on The Oprah Winfrey Show segment, “Growing Up Intersex” during an interview with Hida Viloria.

Conversations about gender identity are popular now, but the fact that sex itself is not exclusively male or female is almost always overlooked. Many do not realize that intersex people exist, and make up 1.7% of the population, which is more common than being trans and equal to the number of redheads. When a child is born intersex, their bodies do not fit the typical definitions for male or female, previously called “hermaphrodites” (a term found offensive by many today).

Co-Author and Biological Sciences Professor at California State University, East Bay, Maria Nieto PhD explains, “Biologists have long known that humans are born with numerous variations in sex traits that make them different from what is considered male or female. This natural sex diversity is sometimes likened to being born with more or less toes or fingers, but having 12 toes doesn’t force you to lie about who you are as a living being, or pressure parents into removing children’s body parts which are vital to adult identity and sexual function.”

To raise awareness that everyone deserves dignity and respect, Maria Nieto PhD wrote the first biology-based amicus brief for the Supreme Court of the United States during California’s Prop 8 marriage equality trial in 2013. Prop 8 stated that marriage can only occur between a man and a woman. As a counter-argument Nieto wrote “tens of thousands of Americans do not fit neatly into the binary categories of “man” or “woman.” This is because many in the population are non-binary with regard to their sex, and yet thousands of these people, who appear in the population to be typical men and women, are already married.”

Co-Author Hida Viloria (‘Born Both: An Intersex Life’) is one of the top spokespeople on intersex issues, who’s consulted the United Nations, Lambda Legal, and more. Viloria explains, “Doctors, intersex people, and our parents have all cited a need for more education to end social marginalization, prejudice and recommendations for irreversible infant sex reassignment surgeries on intersex infants which we would usually never dream of subjecting babies to; ‘The Spectrum of Sex’ was written to address this need.”

Born in New York, Viloria feels fortunate that her mother and father, an immigrant doctor from Colombia, thought, “why operate when she is healthy?” Viloria was raised female without unnecessary cosmetic genital surgeries.

‘The Spectrum of Sex’ is a much needed resource to help end the silence and ignorance around biology based variances, inclusive of intersex people.

BOOK - Available Now for Pre-Order
The Spectrum of Sex: The Science of Male, Female and Intersex (Jessica Kingsley Publishers, February 21, 2020)
By Hida Viloria and Maria Nieto PhD with illustrations by Alex Law
https://www.amazon.com/Spectrum-Sex-Maria-Nieto/dp/1787752658/ref=sr_1_1?keywords=the+spectrum+of+sex&qid=1581468142&sr=8-1

ABOUT THE AUTHORS
Hida Viloria is a Latinx American writer and pioneering intersex and non–binary educator. As former chairperson elect of the Organization Intersex International (OII) and founding director of The Intersex Campaign for Equality, they have been a frequent consultant (United Nations, Lambda Legal, Williams Institute...) radio and television guest (Oprah, Aljazeera, 20/20, NPR, BBC...), and one of the most highly published persons in the field (The Washington Post, New York Times, The Daily Beast, Ms. Magazine, The Huffington Post, OUT, The Advocate, and more). Viloria’s groundbreaking memoir “Born Both: An Intersex Life” (Hachette Books) received critical acclaim and a 2018 Lambda Literary Award nomination. https://hidaviloria.com/about/

Maria Nieto PhD is a Professor in the Department of Biological Sciences at California State University, East Bay and an award–winning novelist. Her current scientific interests have centered on the subject of sex and gender. In 2013 she submitted the first biology–based amicus brief submitted to the Supreme Court of the United States in support of marriage equality. Her two fiction novels (Floricanto/Berkeley Press), “The Water of Life Remains in the Dead” (2015) and “Pig Behind The Bear” (2012), have collectively been awarded a Next Generation Indie Book Award (2016), an Independent Publisher Award (2015) and International Latino Book Awards (2015, 2016). https://pigbehindthebear.com

Hida Viloria is a Human Rights Activist, Latinx American Writer and Co-Author of "The Spectrum of Sex: The Science of Male, Female and Intersex"

Maria Nieto PhD is a Biology Professor at California State University, East Bay, award–winning novelist the Co-Author of "The Spectrum of Sex: The Science of Male, Female and Intersex"