Entry deadline is midnight CDT on May 31 for a chance at $22,000 worth of prize money, for amateur guitarists of all ages at the Sharon Lynne Wilson Center for the Arts in Brookfield, Wisconsin. Milwaukee music company Cascio Interstate Music is one of the major supporting sponsors for the guitar festival, August 18-20, 2016. 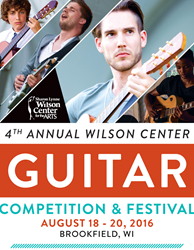 This 3-day event is rapidly becoming the Midwest’s premier and unique showcase for a host of musical styles in the guitar sector.

The Sharon Lynne Wilson Center for the Arts in Brookfield, Wisconsin, will present their fourth annual Guitar Competition & Festival from Thursday, August 18 through Saturday, August 20. The weekend will include the semi-final and final rounds of competition, free master classes and clinics, as well as ticketed concerts for the public on all three evenings.

Milwaukee area musical instrument retailer Cascio Interstate Music is one of the event's major supporting sponsors. Cascio is Wisconsin's largest music store, and is among the top 20 largest musical instrument retailers in the nation. “We are pleased to be back to support the Wilson Center in their major national guitar competition and concert events,” said Michael Houser, CEO, Cascio Interstate Music. “This 3-day event is rapidly becoming the Midwest’s premier and unique showcase for a host of musical styles in the guitar sector. Adding the legendary Al Di Meola, Andy McKee, and Duo Montesinos Tamayo will enhance the live performance concert experience for fans and guitar competition participants alike.”

The competition takes place in two phases: performance video submission and invitation-only live performance semi-final and final rounds August 13-15. Guitarists may register in a maximum of two (2) different genre categories, and all applications must be received by midnight (CDT) on May 31, 2016. Complete information and rules are available at http://www.interstatemusic.com/GuitarCompetition.aspx.

Festival performances open to the public are DUO MONTESINOS TAMAYO on Thursday, August 18 @ 7:30 pm; ANDY MCKEE on Friday, August 19 @ 7:30 pm; and AL DI MEOLA, who will be on his Elegant Gypsy & More Electric Tour USA 2016 on Saturday, August 20 @ 7:30 pm. Follow the links for concert tickets at http://www.wilson-center.com/guitar-fest-performances-2016.

Over the years, Cascio's involvement in the Milwaukee music community has included concert sponsorships at area theaters and venues, sponsorship of a stage for local/regional bands at Summerfest, (the world's largest outdoor music festival), a drumline for the NBA's Milwaukee Bucks, and live performance/educational clinics at their New Berlin retail store.

Cascio's store and website offer electric and acoustic guitars, with the area's largest in-stock selection of top brands including Milwaukee’s number one dealership for Martin, Breedlove, Guild, PRS, Fender and Yamaha and more, along with guitar amps and accessories, drums, wind and string instruments, and numerous other items.

Cascio Interstate Music is ranked as among the top 15 musical instrument retailers in the United States and is celebrating their 70th year in the Music Business this year. The Company markets over 75,000 products to musicians in a number of ways including via their website, http://www.interstatemusic.com, and through their SuperStore, located in the Milwaukee suburb of New Berlin, Wisconsin, as well as their musician-staffed information center at (800) 462-2263. Additionally, Cascio services over 60,000 schools and colleges across the nation. Cascio is a full line music company and carries everything for musicians including drums, percussion, guitars, amps, pro audio, keyboards, sheet music/books and band and orchestra products.