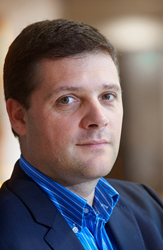 On June 4 Tuyls will participate in an IP track entitled IP to Secure Devices in a Hostile World and present “IoT Security: It Starts with the Silicon.”

On June 5 he will participate in the special session Co-designing Hardware and Software for Secure Next Generation Platforms and present “Untrusted Endpoints are Not an Option.”

Pim Tuyls is CEO of Intrinsic ID, a company specializing in IoT security technology. He initiated the original work on Physical Unclonable Functions (PUFs) that forms the basis of Intrinsic ID’s silicon fingerprinting technology while at Philips Research, where Pim was Principal Scientist and managed the cryptography cluster. In 2008 he founded Intrinsic ID and has headed the company since 2010. He holds a Ph.D. in mathematical physics from Leuven University, holds 50+ patents and is widely recognized for his work in the field of SRAM PUFs and security for embedded applications. He has written significantly in the field of security, including his co-written book Security with Noisy Data, a survey into the theory and practice of new technologies in the field of security based on noisy data, which describes applications in the fields of biometrics, secure key storage and anti-counterfeiting.

The 56th annual Design Automation Conference will be conducted June 2-6 at the Las Vegas Convention Center in Las Vegas, Nev., in North Halls 3 and 4. For more information on the conference visit the DAC website.