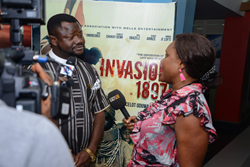 Producer-director Lancelot Oduwa Imasuen speaks to a journalist at the media unveiling of 'INVASION 1897' in Lagos, Nigeria.

The motivation behind the making of 'INVASION 1897' is to raise awareness of the missing African art that still remains in museums around the world.

Iceslide Films, in conjunction with Wells Entertainment Ltd., presents the release of the epic period film, 'INVASION 1897.' The sweeping historical drama is based on the 1897 invasion of the great Benin Kingdom by the British, who then carted off more than 3,224 pieces of Benin arts and artifacts, which, to date, still occupy museums around the globe. The film was produced and directed by award-winning director Lancelot Oduwa Imasuen, who has been on a worldwide campaign to build support for the movie, and awareness of the issues it raises.

'INVASION 1897' is an ambitious film that celebrates the creation of the Nigerian nation, as the filmmakers seek to give an accurate historical account of events and also to make a statement regarding the rights of the West to continue to keep the artifacts. It also opens up the hidden truths behind the invasion, long painted as a “massacre” by the West. The year 2014 marks 100 years since the 1914 death of Oba Ovonramwen N'ogbaisi, the then-sitting Oba who ruled as king from 1888 until 1897, and later died in exile in Calabar, where he was banished by the British following the invasion. It is in that spirit, then, that Invasion 1897 is launched — in his memory.

Following the events depicted in the film — known in Western history as the Benin Expedition of 1897 — much of Benin’s art and culture was looted or destroyed. Considered “war booty” by British officials, more than 3,000 pieces of art and sculpture, including more than 1,000 commemorative metal plaques that decorated the royal palace in Benin City, known as the “Benin Bronzes,” were taken. Some 200 of the pieces were taken to the British Museum in London, while the rest were purchased by other European museums. Today, a large number are held by the British Museum in London, and remain on display in the Africa wing. Other Benin pieces are in Germany and the U.S., among other countries. Part of the motivation behind the making of 'INVASION 1897' is to raise awareness of the issue of the priceless African art that still remains in museums and collections in other parts of the world, and to call for their return.

'INVASION 1897' will have its world premiere at the 2014 Toronto African Film and Music Festival (August 29 to 31), where it will be the opening night film. There will then be a London VIP premiere of the film, presented alongside an exhibition of major bronze works from Benin, on September 13, 2014, with a public premiere at London’s Odeon Cinema to come later. Following that will be a special premiere of 'INVASION 1897' at the world famous Smithsonian Institute in Washington, D.C, on September 17. And back home in Nigeria, there will be a special Nollywood premiere on September 23, 25 and 26.

'INVASION 1897' star Mike Omoriegbe speaks to the press at the media unveiling of the film in Lagos, Nigeria.

A postcard from the film 'INVASION 1897'