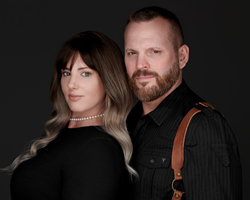 We are here to provide answers to the victims of these Circleville crimes. We are the voice for those who cannot speak.

Cold Case Consultants of America (C.C.C.O.A.), a new agency specializing in unsolved homicides, co-founded by investigative husband-wife duo Alex Baber and J-Lynn Baber, has re-opened Ohio’s infamous “Circleville Writer” case. Assembling a team of the nation’s top detectives and specialists—featuring Forensic Document Examiner Curtis Baggett, forensic anthropologist Dr. Arpad A. Vass, Detective Patrick Apoian, and investigative journalist Joe Cochran—C.C.C.O.A. is proud to announce new findings from its active investigation into details surrounding the case, where a perpetrator notoriously taunted residents with hundreds of threatening “poison pen” letters from 1976 – 1994. C.C.C.O.A. is going public with its initial findings, which are being revealed to the press and the public via its website, CirclevilleMystery.com.

Baggett comments, “Imagine meeting a real modern-day Sherlock Holmes and Watson. I have reviewed first-hand exactly what C.C.C.O.A.’s Director Alex Baber and his wife, Forensic Researcher J-Lynn Baber, are unveiling. With the understanding that forensic evidence does not lie, the public will witness the truth as C.C.C.O.A.’s Investigative Team works to identify the real author behind the infamous Circleville letters.”

Director Alex Baber, who was born at Mt. Carmel Hospital in Columbus, Ohio, and whose family resides in Mt. Sterling, just 20 miles from Circleville, says, “It’s my honor and duty to return to a place I consider home to solve one of Ohio’s most mysterious cases.”

C.C.C.O.A. is releasing findings that track the true culprit and exonerate the late Paul L. Freshour, who was convicted for attempted murder in 1983 and considered to be the notorious letter writer. He served his time and always maintained his innocence, up until his death in 2012.

Assistant director J-Lynn Baber says, “These specific correspondences have been re-examined by the nation’s top Forensic Document Examiner, Curtis Baggett, to identify the true author. Our goal is to bring answers and a sense of closure to the Gillespie and Freshour families.”

Director Baber states, “The existing 30-year old Circleville narrative is inaccurate, and we intend to show with these new findings that the official explanation is wrong.”

The investigative team is reviewing all case files and related evidence collected by law enforcement from December 1976 through December 1994—when the letters finally stopped.

Director Baber and C.C.C.O.A. are currently amassing a database of any anonymous letters sent to law enforcement agencies and/or victims nationwide, spanning all 50 states. The investigative team will run a linguistic comparison of these letters within the database, searching for any similarities of context.

Baggett is being assisted in the investigation by highly respected Detective Patrick Apoian, who has been focusing on the Ronald L. Gillespie crime scene evidence from his fatal August 19, 1977 accident.

In addition to Gillespie’s police reports, both detectives are reviewing Paul Freshour’s 1983 case file and what led to his prosecution and 10 ½-year incarceration. They are sharing new evidence substantiating Freshour’s self-proclaimed innocence.

Highly decorated Detective Apoian, who has received multiple commendations including the Atlanta Officer of the Year Award, states, “I am impressed with the new case discoveries that I have been asked to review and even left speechless at times with C.C.C.O.A.’s case findings.”

Cochran says, “Getting answers and finding the truth while closing cases for the families is more important to Alex and J-Lynn than anything else. Never doubt them as they continue to bring forth truth and justice.”

Director Alex Baber adds, “We are here to provide answers to the victims of these Circleville crimes. We are the voice for those who cannot speak.”

For more details on the evidence and findings, follow along at http://circlevillemystery.com.

About C.C.C.O.A.
Co-founded in 2021, by husband-wife team Alex Baber and J-Lynn Baber, Cold Case Consultants of America (C.C.C.O.A.), was conceived in the belief that every victim deserves answers, and a “cold case” is never truly cold. If an unsolved homicide case becomes categorized under this terminology, it is due to a lack of strong evidence, unproductive leads, limited manpower, or that the agency itself did not receive the annual appropriated funding needed to focus on this particular type of case. C.C.C.O.A. mitigates these issues with its service and its Investigative Team has shown the ability to uncover new evidence within these particular types of cases. New findings will be released to the public in the coming months. For more information, visit CCCOA.US.