The award-winning poetry films "Palpitations of Dust," "Indelible Winter," "The Pines of Spring," and "Sparse" are screened at IPIC Westwood Theater from July 8 to July 14, 2019 (2:45pm PST) 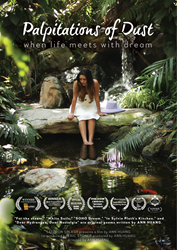 the negative effect of social media of feeling ‘connected yet lonesome’ has to be fed by interior reflexivity, which could be nourished by reading poetry or watching art films.

One of the rising stars in experimental film-making in American cinema and a pioneer in lyrical poetry films, Ann Huang, will have her first quadrilogy publicly screened at IPIC Westwood Theater this week. The film block contains Huang's four award-winning experimental films, Palpitations of Dust (autumn), Indelible Winter, The Pines of Spring, and Sparse (summer), each film representing season of the year.

As the writer, director, and principal of Saffron Splash Media, the production house for avant-garde poetry films headquartered in Newport Beach, Huang believes that Meta-Cinema is the future of American cinema. Huang says, "the negative effect of social media of feeling ‘connected yet lonesome’ has to be fed by inteior reflexivity, and nourished by reading poetry or watching art films." A recent report shows that even though the fiction readership has reduced dramatically, poetry readership has soared steadily for the last seven years, especially for the age group of 14 to 28. Moreover, meta-cinema brings in non-diegetic aspects, much like sorting out dreams and is in line with the self-reflection and companion spectatorship that most millennials need.

As with her poetry, Huang's focus continually evolved and remained dynamic as she combined her interests in surrealistic gestures using collective unconscious, dream logic and idolized symbolism in her experimental films. Huang's best-known and debut poetry film, Palpitations of Dust (2017), beautifully combines poetic aesthetics with cinematic techniques. Palpitations of Dust won more than thirty festival awards and nominations worldwide, most notable being the 2017 Prince of Prestige Academy Award for Best Experimental Film.

In their own right, Huang says her dreams played a significant role in contributing to meta-cinema film-making in her experimental shorts. When she wakes up from a dream, the pieces she can recall are fractured. In these instances, she thinks of herself as both the lead actor in her dreams as well as the audience. "The construct of my memories is a mysterious instrument I must rely on as a non-narrative filmmaker. I try to identify with my conscious self as well as my deepest, collective unconscious at large. I want to bring magic into the meta-cinematic lens so that our realities can be interpreted both inside and outside of onscreen storytelling." Huang ends the note on her view of the freedom for independent cinema.

The use of meta-cinema in film is analogous to meta-fiction in literature. It’s a style of film-making in which the film deliberately informs the audience that they are watching a film. During the 1960's, the French New Wave movement started using meta-cinema to unveil behind-the-scenes footage captured during the making of movies. The idea was to render a film’s true color and magical essence in its original state. Meta-cinema achieves this by having the characters commentate on the plot during the film, typically turning to talk to the camera (audience) directly.