CRAVE, a new BBQ joint franchise started in 2018, will feature a self-serve beer wall in every location. 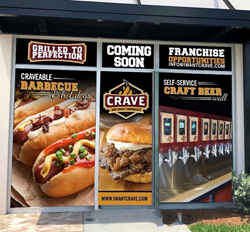 CRAVE, a new BBQ joint franchise started in 2018, will feature a self-serve beer wall in every location.

As the first national deal and franchise to have iPourIt’s self-serve technology in every location, CRAVE will be a pioneer in the fast-casual, self-serve market.

iPourIt increases its lead in the market with a national deal with CRAVE Hot Dogs & BBQ, a new fast-casual franchise.

CRAVE will soon open its doors in several locations across the nation, including Dawsonville, Ga., Wilmington, N.C., Houston, Texas, Oklahoma City, Okla., Washington D.C., and Orlando, Fl. It will be the first franchise using iPourIt self-serve technology in every location. Each location will have anywhere from 18-32 self-serve taps.

Husband and wife power duo and franchise veterans, Sal and Samantha Rincione, established the fast-casual franchise in early 2018. With combined experience of over 35 years in the franchise industry, Sal and Samantha wanted to find their next big venture, and they wanted to do it together. After extensive research, they decided to implement a self-serve concept and created CRAVE. CRAVE brings something to the table that nobody else in the franchise industry is doing.

“We are extremely excited to partner with iPourIt for our self-serve beer walls. We only work with companies who believe in our vision of success, which iPourIt does. We look forward to expanding nationwide with them as a partner,” said Sal, CEO of CRAVE.

CRAVE will beat that craving for the perfect lunch, snack, dinner or beer. The self-serve beer wall allows patrons to choose from a variety of regional and local craft beers, as well as wine and cider. Each patron can pour as much or as little as they choose, paying for what they pour.

Vice President of iPourIt, Darren Nicholson says, “iPourIt is excited to partner up with CRAVE Hot Dogs & BBQ and to grow the business. As the first national deal and franchise to have iPourIt’s self-serve technology in every location, CRAVE will be a pioneer in the fast-casual, self-serve market. Sal and Sam are franchise industry veterans, so we look forward to working together!”

CRAVE is now looking for franchise partners throughout the U.S. Go to http://my.officevp.com/s/27324 for more information on owning your own CRAVE franchise.

CRAVE is a fast-casual BBQ joint, established in 2018. They feature mouth watering BBQ sandwiches and sliders along with 100% all beef hot dogs, bratwursts, and sausages. Patrons can top the sandwiches, sliders and hot dogs any way they like with a variety of toppings. Each CRAVE location features a self-serve beer wall, allowing patrons to pour their own beer, wine or cider. At CRAVE, it’s all about customer satisfaction and experience! Find the menu and a location near you at https://iwantcrave.com/.