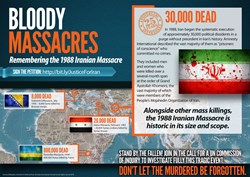 Iranian Resistance president-elect Maryam Rajavi has condemned the 'shameful and evil' genocide of 30,000 political prisoners in Iran 25 years ago and called on the international community to bring the mullahs who ordered the atrocity to justice.

Mrs. Rajavi also called on the US, European Union and United Nations to take urgent action to protect the 3,000 Iranian dissidents in Camp Ashraf and Camp Liberty who are being persecuted by Iraq at the behest of the Iranian regime.

Her condemnation of the massacre comes amid growing international demands for the UN to set up a committee of investigation into the killings, and an online petition by the Iranian Resistance for the UN to recognize the slaughter as a crime against humanity.

In a message marking the anniversary of the 1988 massacre, Mrs. Rajavi said: "They were the heroes and heroines of the Iranian people who were executed by Khomeini's fatwa for their belief in freedom or refusing to abandon their commitment to the People's Mojahedin Organization of Iran and its struggle for a free Iran."

The Iranian people will remember for generations the historical perseverance of these victims.

Despite the mullahs' ruthless suppression, Khavaran, one of the mass grave sites in Tehran, has turned into a gathering place for bereaved families and those who aspire to a free Iran.

Twenty five years has passed but this epic resistance for freedom still continues.

"In a shameful and evil double atrocity, Khomeini and his mullahs spilled the blood of political prisoners before the regime's appeasers and those who serve the mullahs' interests did their best to conceal this crime... but, they have failed."

"The most important factor in their defeat has been the leadership of Massoud Rajavi and presence of the resistance and a democratic movement committed to the goals and aspirations of the fallen heroes and heroines. Particularly with the perseverance of thousands of PMOI freedom fighters in Liberty and Ashraf striving for freedom and democracy in Iran.”

Mrs. Rajavi said there was undeniable evidence backed by international jurists and international human rights institutions that the plight of dissidents in Camp Ashraf and Camp Liberty was a 'clear case of a crime against humanity and genocide'.

She added: "Neither crime against humanity nor genocide can be overlooked. The lack of a proper response for such a grave crime would only embolden the masterminds and the perpetrators to continue their crimes.

"On behalf of Iranian people and the Iranian resistance I call on the United Nations to form an investigation commission into the massacre of political prisoners in Iran in 1988 and urge the Security Council to establish a special tribunal and to prosecute the perpetrators and masterminds of this crime."

"Finally, I call on the international community including the United States, European Union and the United Nations to take immediate actions for protection of the pioneers of the Iranian people, PMOI members in Ashraf and Liberty, who are continuing the path of these fallen prisoners.

"I salute the memory of all prisoners who were massacred and the symbol of Mojahed prisoners, Monireh Rajavi, whose principal crime was being the sister of Massoud Rajavi, the leader of Resistance, and her love for freedom.

"I salute also the memory of 120,000 members and sympathizers of the Iranian Resistance who sacrificed their lives for the cause of Iran’s freedom."

Maryam Rajavi during a large anti-regime conference in Paris

Huge crowds attend any NCRI Conference. NCRI considered to be one of the most potent and powerful anti-regime organizations in the world