Is China Responsible for the Coronavirus Pandemic? Will the truth ever be told? New Book DECEIT OF THE SOUL: Saving the World Before the Covid-19 Pandemic Explores

COVID-19 has created a worldwide crisis and questions still remain: where did it start and why? Expert litigator and first-time author, Henry R. Cox, draws from 40 years of legal experience to examine and unravel what might be the "true story behind the story" in his new conspiracy thriller DECEIT OF THE SOUL: Saving the World from Covid-19 Before the Pandemic. 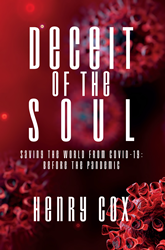 IS CHINA RESPONSIBLE FOR COVID-19?

Will the truth ever be told?

As a successful litigator, Henry R. Cox has written hundreds of non-fiction stories for the courtroom to expose and unravel the drama and comedy of human events. He says, "There's always a 'story behind the story' that is often the most meaningful and never told or brought to the surface."

Now he draws from 40 years of legal experience to examine and explore what could plausibly be the real story behind COVID-19 in his new book DECEIT OF THE SOUL: Saving the World from Covid-19 Before the Pandemic. A timely and well written work of fiction that features two compelling characters with intersecting story lines full of suspense.

Inspired by worldwide news coverage, Cox began to question the who, what, why and where the pandemic derived. It was clear that real people took real actions that led to it. This book explores the untold story of how we got here and "the" story that will (can) never be told.

He provides chilling details concerning the purpose of COVID-19, and why it was developed. More importantly WHO developed it.

There is a story before COVID-19 became a pandemic. For Colonel Li Huiwei, the story never ends.

DECEIT OF THE SOUL follows Colonel Li Huiwei whose intellect was always a blessing and a curse since she was taken (recruited) as a young girl from her family to be trained as an asset for the People's Republic of China. Now a Colonel in the People's Republic Air Force and an expert in statistical modeling, she stumbles on the information to potentially bring the Global economies to their knees. It was her plan, one she never intended, and one she cannot stop.

Cox also introduces readers to Aiguo-Tao, a chief logistics officer from the Wuhan Institute of Virology, weaving together two very suspenseful and intersecting story lines in the race against time.

Colonel Huiwei knows the odds, she made them. In a world where trust is a limited commodity, can her former colleagues from M.I.T, and a Royal Air Force Commander, save her from herself, and the World from the worst possible outcome of a Global pandemic?

Cox asks, "At what point do people unravel the identity thrust upon them and discover the 'deceit of the soul' finding the inner strength to act on the actual truths revealed, to choose a path when there are no good choices?" Further adding, "In the end, people inherently create their own sense of truths. Then, they engage in a type of cognitive dissonance to use facts to reinforce their own view of the truth and to discredit other facts that do not fit within their paradigm."

Henry R. Cox has been a successful litigator for 40 years, litigating hundreds of cases nationwide that expose and unravel the drama and comedy of human events. After decades of writing hundreds of non-fiction short stories for the courtroom, he brings his colorful style to fiction that reveals the intrigue and humor of the human condition.

“Whether it’s a jury trial or helping people resolve life changing conflicts, there’s always a 'story behind the story' that is often the most meaningful and never told or brought to the surface,” says Cox. "If you want to know how people from different backgrounds and interests talk and deal with life's conflicts, read hundreds of thousands of pages of deposition testimony, then condense it down to relevant points for a Federal judge or jury."

He found success blazing his own path in life. Whether it was being the shortest NCAA Division I hurdler on a Nationally ranked track team or becoming the first 'big firm' attorney to pursue complex civil rights cases against Fortune 100 companies. A prolific legal educator, he was selected to the National Academy of Distinguished Neutrals, Super-Lawyers of Kansas and Missouri, Martindale-Hubbell AV rating for twenty-five years, and is only one of six attorneys selected to The Best of the Bar in Kansas City for fifteen years. He lives with his wife in Shawnee, Kansas.