Isaiah Houston’s newly released “Before I Was Formed” is a stirring book that allows the children to know how big God is compared to the devils and challenges life.

“Before I Was Formed” from Christian Faith Publishing author Isaiah Houston is a riveting story of a child who has a strong faith in God and became brave after knowing that God is bigger than a monster who tries to tempt him. 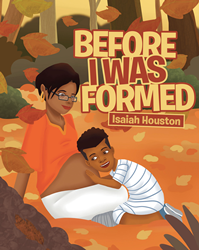 “Before I Was Formed”: a well-crafted children’s book that shows the mighty name and power of God and how He defeated the monsters in life. “Before I Was Formed” is the creation of published author Isaiah Houston, a person who credited his walk with God as further inspiration and encouragement to see it through to completion. He works with the youth through such programs as Black Male Explores and Stage Aurora Theatrical Summer Camp.

“It didn’t matter whether they were under my bed, on the playground, at church, or even in my head.

“But here’s the thing I didn’t realize.

“You’re the hero too! You’ve always been before you were ever formed.

“Before I Was Formed is a must-read to instill self-identity, build self-confidence, and ensure your child doesn’t remain in fear and helpless if no one is around.

“Remember, the hero is inside you!”

Published by Christian Faith Publishing, Isaiah Houston’s new book is a compelling storybook that shows how God stays in everyone’s life, making them brave and strong in fighting the demons that try to ruin the lives of many.

With this book, Houston delivers an encouraging message to the readers enabling them to be brave in fighting the devils and other challenges that may come in their life.

View a synopsis of “Before I Was Formed” on YouTube.

Consumers can purchase “Before I Was Formed” at traditional brick & mortar bookstores, or online at Amazon.com, Apple iTunes store, or Barnes and Noble.

For additional information or inquiries about “Before I Was Formed”, contact the Christian Faith Publishing media department at 866-554-0919.