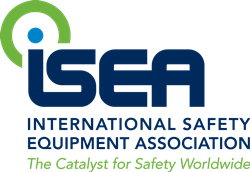 There was no way we were going to leave America’s healthcare workers and first responders unprotected during this perilous time. But we had to protect safety equipment manufacturers and distributors as well. -Charles Johnson, ISEA President

The International Safety Equipment Association (ISEA) presents the Robert B. Hurley Distinguished Service Award each year to an individual whose efforts have advanced and promoted workplace safety and health. This year, however, the Association is presenting the award to six recipients — three from the U.S. Senate and three from the U.S. House of Representatives — who played pivotal roles in protecting America’s supply of respirators.

The recipients of ISEA’s 2021 Robert B. Hurley Distinguished Service Award are:

Respirator Supply Was at Risk
As the SARS-CoV-2 pandemic hit the world in 2020, no one knew much about what came to be known as COVID-19 except that it was potentially lethal. Demand for NIOSH-approved N95 respirators exploded almost overnight. Respirator manufacturers and distributors were being called on to provide their products rapidly to protect healthcare workers and first responders against this dangerous virus.

Safety equipment companies faced a distressing dilemma: Ramping up production to meet respirator demand posed legal risks for companies and health risks for their employees. But scaling back was not a realistic option.

ISEA members went to Congress with a solution: Add NIOSH-approved respirators to the Public Readiness and Emergency Preparedness (PREP) Act. This law shifts the liability of items needed for a public health emergency response to the federal government.

“This situation was so dire that it required expeditious action both from our member companies and from Congress,” explained ISEA President & CEO Charles Johnson. “There was no way we were going to leave America’s healthcare workers and first responders unprotected during this perilous time. But we had to protect safety equipment manufacturers and distributors as well.”

Profiles in Congressional Courage
Six members of Congress stepped forward to help make ISEA-member companies’ hazardous work on behalf of the U.S. and the world safer. These elected leaders from both sides of the aisle understood that lives were at stake. They recognized that, with the pandemic bearing down on people all around the globe, respiratory protection for healthcare workers, emergency responders, caregivers at home, and others would be essential. They also realized that manufacturers, distributors and others who provide and train workers to use these vital devices could find themselves in legal jeopardy.

In the House of Representatives, Don Bacon (R-Nebraska), Paul Tonko (D-New York) and Jim Langevin (D-Rhode Island), were the first to step forward, co-sponsoring a bill to add respirators to the PREP Act.

Senators Kyrsten Sinema (D-Arizona) and Deb Fischer (R-Nebraska) offered the companion bill in the Senate. Their action gave then-Senate Majority Leader Mitch McConnell (R-Kentucky) legislative text to add to the CARES Act he was drafting at the time.

When Senator McConnell was crafting the CARES Act, he saw the importance of including this provision and making sure it became law.

Thanks to the courage, hard work and skill of these six representatives and senators, Sections 3012 and 3013 of the CARES Act added respirators to the PREP Act. The bill became law on March 27, 2020, and changed the course of ISEA-member companies’ — and the nation’s — ability to respond to the pandemic.

"I am extremely grateful to accept this year's Distinguished Service Award from ISEA,” said Rep. Bacon. “Reps. Tonko, Langevin, and I worked together on the Health Care Workforce Protection Act of 2019 which proved to be vital during COVID-19, granting quicker manufacturing of respiratory protective devices for healthcare workers and first responders. Whether in a pandemic or not, it is important we always advocate for our manufacture workers and remove production obstacles to safeguard the health of those serving in the medical field."

Rep. Langevin commented, “When the COVID-19 pandemic struck, our frontline workers relied on Congress to support manufacturers producing the personal protective equipment they so desperately needed,” said Rep. Jim Langevin. “I’m proud of my efforts working across the aisle to cut red tape and get masks in the hands of nurses and doctors, which is why I’m honored to receive the Distinguished Service Award from ISEA. I’ll always keep working to ensure that our medical professionals have the safety equipment they depend on.”

“When COVID-19 first began raging across the nation and world, our front line healthcare workers put their lives on the line to care for our communities, often doing so without the personal protective equipment that would safeguard them from this deadly virus,” Rep. Tonko said. “I worked swiftly with my colleagues, Representatives Bacon and Langevin, to remove barriers on increasing the production of N-95 respirators to ensure our brave health care professionals were kept safe as they fought to save all of us. I’m humbled to receive this year’s Distinguished Service Award and thank ISEA for their continued commitment to protecting workers’ health.”

About ISEA
Headquartered in Arlington, Virginia, the International Safety Equipment Association (ISEA) is the trade association in the U.S. for personal protective equipment and technologies. Its member companies are world leaders in the design, manufacture, testing and distribution of protective clothing and equipment used in factories, construction sites, hospitals and clinics, farms, schools, laboratories, emergency response and in the home. Since 1933, ISEA has set the standard for the personal protective equipment industry, supporting member companies united in the goal of protecting the health and safety of people worldwide.