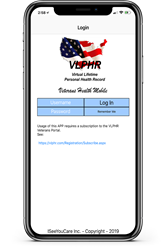 A Solution to Interoperability

Building on its 2014 rollout of the Free Subscription Program of the company’s cloud-based My eMHR Personal Health Records system for disabled veterans, ISeeYouCare has created a separate platform solely for use by Disabled Veterans called ‘VLPHR for Our Veterans’ (http://www.vlphr.com). In addition. ISeeYouCare has just released a mobile version of its cloud-based platform in both Android and IOS called ‘Veterans Health Mobile’.

The My eMHR has for some time been the only patient centric solution capable of collecting and consolidating a patient’s medical records from the nation’s top medical records companies as used by 95% of the nation’s hospital (inpatient & ambulatory) systems to include EPIC, Cerner, Allscripts, NexGen, Athena and even the VA’s Vista system.

The solution includes all the same features of its cloud-based big bother My eMHR with unlimited lifetime storage for all of a veteran’s medical records (17 sections to include medical imaging), eTelehealth (HD Video Consult with Remote Physicians), Clinical Decision Support, ability to transmit medical records to any care provider in North America and much more. The system uses a proprietary technology called “Fetch My Records” from which to retrieve (Fetch) a user’s medical records from their existing patient portal as provided by all the above medical records systems. All that the system requires is the user’s credentials to their disparate patient portal in order to retrieve their medical records agnostically.

Most individuals to include veterans receive their care from multiple heath care providers using different systems. “That results in a patient medical records being siloed in different places with no method of collection and aggregation. Ultimately, that means any given care provider is being limited in their ability to diagnosis and treat any given patient due to the unavailability of ‘all’ of the data, absent not one piece of data, that if known, would have altered the final diagnosis and care treatment plan for the patient”, according to COL Glen N. Feather, M.D.

“There are 18.2 million veterans in the United States, according to the most recent statistics from the US Census. More than nine million veterans are served each year by the Department of Veterans Affairs.” (Sep 20, 2018) These veterans receive approximately forty-percent (40%) of their care from the Veterans Affairs (VA) health care system and the other sixty-percent (60%) from the private sector-based health care system making the value for such a solution as represented by ISeeYouCare’s solution that much more meaningful.

With the passage and implementation of the Missions Act of 2018 providing every veteran with the choice of receiving medical services from the private healthcare system as opposed from the VA Healthcare System with reimbursement assured by the VA, the need for interoperability of medical records is even more a necessity.

“Sometimes having a vision powered by passion and a little help from above can accomplish more than you ever dreamed possible”. Robert E. Higgs - President/CEO of ISeeYouCare, Inc.

From the first rollout of the VLPHR Gold Lifetime Subscription program of 2014, ISeeYouCare’s commitment to our veterans has never diminished. We believe our veterans deserve the best America has to offer in gratitude of their service to the nation. If the DOD, VA and CMS can’t fulfill this much needed service to the men and women of our armed forces and veterans, ISeeYouCare will.

Starting September 16th, the ISeeYouCare Virtual Lifetime Personal Health Records System known as VLPHR for Our Veterans and its mobile companion called ‘Veterans Health Mobile’ will be made available to all of the nations disabled veterans at no cost.