Hacker Halted, EC-Council’s premier IT security conference, wrapped up its fifth consecutive year in Atlanta, GA, bringing together attendees from around the world for two days of debates, keynotes, and breakout sessions all centered around the theme: The Art of Cyber War: Lessons from Sun Tzu. 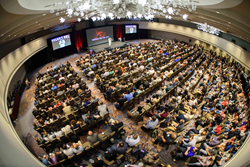 A special addition to this year’s event was IBM’s sponsorship of women’s entrance fees to attend the conference. The sponsorship covered 460 women’s tickets, leading to improved representation of women at the event.

Next, the audience was treated to the “Hackers, The Media, Truth, Trust, and Alternative Facts” debate moderated by Winn Shwartau, Founder of The Security Awareness Company with panelists Gregory Carpenter, COO of Pragmatick IO, Inc. and Hollywood Producer Michael Masucci. The debate included lively exchanges on the important issues surrounding the responsibilities of law enforcement, privacy concerns of citizens, corporate security programs, and the hacker perspective on where the nature and importance of truth.

For those hackers looking to test their skills, there was a Capture the Flag game presented by Core Security running throughout the two days of the conference where competitors scored points for penetrating the game’s defenses. Along that same theme, there was also a lock picking exhibition run by Augusta Locksports where attendees’ physical security skills were put to the test.

A special addition to this year’s event was IBM’s sponsorship of women’s entrance fees to attend the conference. The sponsorship covered 460 women’s tickets, leading to improved representation of women at the event.

The two days of speakers included luminaries in the hacking community, including Chris Roberts, Chief Security Architect of Acalvio Technologies, presenting his talk entitled “Leave your zero days at the door, leave your latest hacks behind, AND bring your playbook for the blue team” to a packed room. Another draw was Georgia Weidman, Founder and CTO of Shevirah. Weidman delivered a stellar talk on “Bypassing iOS Security Using Enterprise Provisioning Hooks.”

The first day concluded with a happy hour and hiring fair, sponsored by CyberSec Jobs, which included another appearance by the Atlanta Chinese Dance Academy Dancers.

Conference-goers kept track of sessions and interacted with each other using the Hacker Halted app. They also used the app to rate each speaker and ask questions to the group. Over 400 attendees used the app while at the conference, helping make new comers and Hacker Halted veterans alike feel welcome and connected.

The theme for next year’s event, September 13 – 14, 2018 in Atlanta, GA; has already been announced and will be “The Ethical Hacker’s Guide to the Galaxy: Life, the Universe, Everything … Hacked.” Registration is now open for the 2018 event.

About EC-Council
EC-Council has been the world’s leading information security certification body since the launch of their flagship program, Certified Ethical Hacker (CEH), which created the ethical hacking industry in 2002. Since the launch of CEH, EC-Council has added industry-leading programs to their portfolio to cover all aspects of information security including EC-Council Certified Security Analyst (ECSA), Computer Hacking Forensics Investigator (CHFI), Certified Chief Information Security Officer (CCISO), among others. EC-Council Foundation, the non-profit branch of EC-Council, created Global CyberLympics, the world’s first global hacking competition. EC-Council Foundation also hosts a suite of conferences across the US and around the world including Hacker Halted, Global CISO Forum, TakeDownCon, and CISO Summit.
For more information about EC-Council, please see http://www.eccouncil.org.