One hundred Italian scientists have sent a petition to their government to reject Anthropogenic Global Warming as unfounded in science, meanwhile the Canadian Sustainable Finance Panel has jumped on this sinking ship of climate change, says Friends of Science. A new report, “The Ontario Government Climate Legacy” should offer fair warning to Canadians on the financial catastrophe that awaits with “Climate Action.” 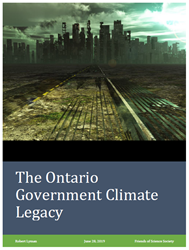 it is scientifically unrealistic to attribute to humans the responsibility for the warming observed for the last century until today. Therefore, the predicted alarm is not credible, since it is founded on models whose results are in contradiction with the experimental data.

As reported by Italia Oggi of July 03, 2019, one hundred Italian scientists have signed a petition that the human-caused (anthropic/anthropogenic) “global warming theory is just an ideological lie that shows the subjugation of science to politics,” while in Canada the Globe and Mail op-ed of July 02, 2019, entitled “The climate plan we’ve been waiting for” lauds the Sustainable Finance Panel report that jumps on the sinking ship of climate action, says Friends of Science Society.

Italia Oggi reported about the scientists, "After a careful historical analysis of the climate changes recorded over the centuries, they say it is scientifically unrealistic to attribute to humans the responsibility for the warming observed for the last century until today. Therefore, the predicted alarm is not credible, since it is founded on models whose results are in contradiction with the experimental data.”

The Italian petition and signatories have been posted on the Friends of Science blog.

These statements bring into question recent Canadian court rulings on the contested carbon tax. A Globe and Mail op-ed by law professor Janis Sarra, published July 02, 2019, makes claims about extreme weather and climate catastrophe. Such claims are refuted by the Italian scientists’ statement, thus no deep emissions cuts are necessary at all.

At the 2018 Porto Basic Climate Conference, Professor Nicola Scafetta of the University of Naples Federico II, presented a study illustrating the influence of periodicity in planetary movements/orbital conjunctions and climate variability on earth. Scafetta's work shows that the sun has a major effect on climate and the climate sensitivity upper limit is 1.5 deg. Celsius. VIDEO: youtu.be/F20tsr2n1YM

A new report by Robert Lyman, entitled “The Ontario Government Climate Legacy,” published June 28, 2019, gives fair warning of the crushing financial consequences of ‘green schemes’ such as those advocated for by the Canadian Expert Panel on Sustainable Growth.

As Robert Lyman notes, “Ontario’s disastrous electricity policy has been publicized and commented on extensively by many sources, so this is not news. What is news is to lay the blame squarely at the door of its climate policy motivation, and, perhaps, to remind people of how high the bill has been – $9 billion for poor contracting practices, $133 billion in global adjustment fees from 2015 to 2032 (at least 20 per cent of which relates to renewables), $3.6 billion to build the “smart grid and smart meters”, up to $55 billion in deferred costs that will hit future ratepayers, and 75,000 lost industrial jobs. That is quite the tally for zero global environmental benefit.”

Friends of Science Society issued a report critical of the Expert Panel and of David Suzuki Foundation’s “Net Zero” plans, entitled “Shocking Reality,” issued June 19, 2019. The simplistic, Utopian view that electrification and decarbonization are the way forward are shown to be a path to economic and energy catastrophe.

As outlined in Adam Harmes book “Unseen Power: How Mutual Funds Threaten the Political and Economic Wealth of Nations” of 2001, it appears that ‘expert’ panels on sustainability are more engaged with mutual fund investors and green crony subsidy plans than they are with climate science experts.

Friends of Science Society’s report of May 1, 2019, rebuts the Canadian federal government’s climate report (CCCR2019) with “Climate Change Your Mind.”