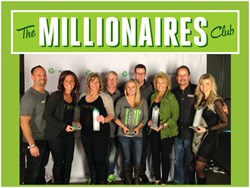 Who would have thought that we would be multi-millionaires let alone blazing the trail our team is following with this amazing vehicle?

Top money earner, Kami Dempsey and husband Nathan were recognized as It Works' first multi-millionaires and welcomed once again to It Works! Global’s exclusive “Millionaire’s Club” along with 12 of the newest members on their team on January 17, 2014.

The couple was honored to belong to such an elite group for the second year in a row, but was more excited for the Club's 14 newest members! The Dempsey's are proud to announce that of the 14 new It Works! Millionaire's Club Members, 12 are on their team and four of the 12 are personally enrolled.

"I look at the people inducted and I'm in complete awe," said Dempsey. "Who would have thought that we would be multi-millionaires let alone blazing the trail our team is following with this amazing vehicle? I could not be any more proud of their hard work and determination to change their lives and the radical effort they are investing to help others do the same."

The proud new members accepted the award and took the stage at the Tampa Convention Center for It Works! Global’s Annual Freedom Conference 2014 (10,000 plus in attendance). In addition to stage recognition, members were awarded with a special Millionaire’s Club trophy.

"I have always loved to watch Kami work, but her most amazing skills are the ones you can't see," said husband Nathan. "She has intangibles that are rare in this industry and yearned for everywhere else. People simply gravitate toward her. She has knack for leadership, a desire to connect with people and an ability to build lasting relationships."

It Works! Global, is a direct sales company focused on changing lives physically and financially with a naturally based product line. Aside from its widely recognized, world’s first naturally based body contouring line (a.k.a the "Skinny Wrap"), they also provide nutritional and cosmetic skin care products to a growing number of the population. The company has been gaining attention over the past three years as it saw 543% increased growth, and was ranked on Inc. Magazine’s prestigious 2012 Inc. 500/5000 list as one of the 50 fastest-growing companies in its category.