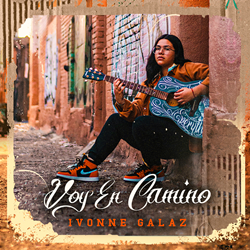 “I want to thank Jimmy Humilde, the man who believed in me since the beginning,” says Galaz, who turns 18 this year and hails from Sonora, Mexico. “My label-mates are already like family.” For “Voy En Camino,” Galaz sings most of the songs solo, except for one track featuring artist Abraham Vazquez.

Galaz’s passion for telling raw, authentic stories shines through on her latest release, representing an alternative voice in the often male-dominated urban Mexican genre. Shortly after her introduction to the regional-trap fusion (see Natanael Cano’s El de La Codeina),” Galaz met the aforementioned Rancho Humilde CEO Humilde, who two years ago gave her the opportunity to record with Cano the first song she ever wrote, “Golpes De La Vida.” It was included on the artist’s 2019 EP, “Mi Nuevo Yo.” The explosive single officially launched Galaz’s career, emphatically announcing her entry into the regional urban scene, and has since become her most streamed video on YouTube, garnering over 2.1 million views.

On the social side, Galaz is quickly emerging as an extraordinary role model for young women around the world, boldly challenging and shattering stereotypes in regional urban music through her signature voice, honest lyrics and authentic fashion sense. She is also a tremendous defender of women’s rights, recently demonstrating her dedication to the fight against femicide when she released a stunning tribute to Vanessa Guillén, the U.S. Army soldier who was slain by a male soldier last year.