“Death Dance” from Christian Faith Publishing author J. Michael Koppen is a fascinating thriller that will have readers racing to see what awaits a cast of affable characters on an unexpected journey of danger, discovery, and the unknown. 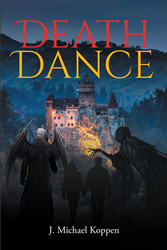 “Death Dance”: an exciting supernatural thriller that will delight the imagination. “Death Dance” is the creation of published author J. Michael Koppen, whose career as a pharmacist and executive coach has spanned five decades.

Koppen shares, “The crusted pool of blood below the passenger door was her first indication of the carnage. The sirens were screaming as uniforms of various colors performed on a stage of horror. Three bodies lay on the sidewalk, two were attended by EMTs with frantic pace. The smeared blood on the plastic covering the third body relayed its finality. A disturbance to her left demanded Lainee’s attention. Four police officers struggled to hold a wildman.

“As if in a scene from a nightmare, he broke free running straight for her. It was all in slow motion. He grabbed her as he ran by, nearly knocking her to the ground. The strap of her Coach purse caught his hand. He seized the opportunity, spinning around behind her. He grabbed her by the throat, her body directly between the officers and his. Lainee had little time. Alone with this animal was not an option. She stomped with all her weight on his right foot, then slammed her head backward feeling it connect with his cheek. She allowed herself to fall straight to the ground.

“The noise was deafening as the guns exploded. The man sighed and sagged to the earth behind her. She noticed a slight twitching of his legs as his body accepted death.

“Death Dance is a voyage into the supernatural.

“When a deranged meth addict empties his gun into a car waiting at a red light, the death of a young woman and ultimately the gunman’s demise launches them on a journey neither could have imagined. Death Dance penetrates an existence a breath away for all of us. It challenges all we suppose about influences in human life. This unlikely duo is offered a choice of final judgment or accepting a calling from the king of glory. Their choice finds them on a battlefield hunted by an enemy far stronger than imagined. The seeming impossibility of completing their task tests faith, trust, and belief. Each obvious weakness intensifies doubt, skepticism, and suspicion, challenging every assurance of what lies within.”

Published by Christian Faith Publishing, J. Michael Koppen’s new book is an action-packed addition to any lover of the supernatural’s library.

Koppen delivers a second compelling fiction that will captivate readers from the start.

For additional information or inquiries about “Death Dance,” contact the Christian Faith Publishing media department at 866-554-0919.