J.P. Marshall’s New Book “Shadows of Destruction: Point of Origin” is a Riveting Novel Set in An Alternate Universe Charged with Metahumans and Advanced Military Forces

Recent release “Shadows of Destruction: Point of Origin” from Page Publishing author J.P. Marshall is an engrossing story of a man’s astounding circumstances in a cutting-edge parallel world. 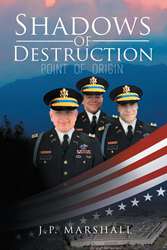 J.P. Marshall, a dedicated author from Missouri who has served in the military, has completed his new book “Shadows of Destruction: Point of Origin”: an electrifying narrative of a man’s struggles in a highly advanced alternate reality filled with technological marvels and complex mechanisms.

Author Marshall reveals a plot that exudes with surprising twists and turns that hook the readers’ attention. “Shadows of Destruction Origins” is the first book of a series in the Shadows of Destruction story line. The origin book details the main character, Greg Martin’s humble beginning and how he dreams up a new unit to help in the real-time Intelligence gathering for the Military to carry out a successful war on terrorism and against rouge nation states whose agenda is to bring down the United States and its allies.

The story revolves around modern and near future times but is set in an alternate reality where Psychic abilities are gradually becoming more prevalent. This story takes Greg Martin from his days as a Human Intelligence operative to a Pentagon analyst and a direct aid to General Reinhardt along with his closest friend, Philip Leland. From the East Coast state of Virginia to the desert Post of Fort Huachuca, Arizona, the story takes readers from the birth of an idea to the bringing to life a specialized unit of the Army’s intelligence arm known as Military Intelligence Special Operations (MISOP).

Marshall shares, “You will be drawn into a story that sees how a new unit is brought about in the Army and how it is kept secret from the normal operations of the Army and the US Government. Origins will give the reader and the inside story of the MISOP units true nature and how the training phase to become operational is conducted. This tale will keep the reader wondering what will happen next and how the characters come to life with purpose and meaning. Origins is filled with struggles of morality love and the hope of achievement while remaining in the shadows and behind the scene action.”

Published by New York City-based Page Publishing, J.P. Marshall’s enthralling tale follows the trail of a man as he deals with the moments in his life that test his resolve and character.

Readers who wish to experience this galvanizing work can purchase “Shadows of Destruction: Point of Origin” at bookstores everywhere, or online at the Apple iTunes store, Amazon, Google Play, or Barnes and Noble.