J.S. Gilgen's newly released "The Cop, the Paramedic, and the Barista" is a savvy tale where vulnerability and greed explodes into murder, mystery, and mayhem

“The Cop, the Paramedic, and the Barista” from Christian Faith Publishing author J. S. Gilgen is an enjoyable fiction that takes readers on a wild ride of romance and intrigue as a duplicitous paramedic sets off a series of unexpected twists of fate. 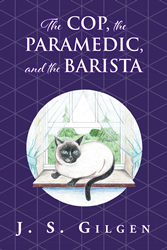 “The Cop, the Paramedic, and the Barista”: a powerful narrative filled with complex characters and action-packed drama. “The Cop, the Paramedic, and the Barista” is the creation of published author J. S. Gilgen. Gilgen was raised in Fort Wayne, Indiana, and attended Ivy Tech Community College in Fort Wayne, studying psychology and behavior modification. She and her husband currently live in Bluffton, Indiana, and has been involved in animal rescue and Forever Families. Now semiretired, most of her days are being spent with her writing, her husband, and their dogs.

Gilgen shares, “As a new Christian, Officer Christopher James finds himself in a noncommittal relationship with a sexy but not quite divorced paramedic by the name of Sarah Harlon. Chris agrees to move a sofa from her marital home, only to be thrashed in the eye by her cat. Even still, Sarah dazzles Chris with her womanly ways but only until Chris’s faith goes up against Sarah’s dubious character flaws. When Chris is unknowingly set up with Sarah’s roommate, he reconsiders his course and sets his damaged sights on the local barista.

“Paramedic Sarah Harlon feels Chris would be a great play toy, maybe even a potential spouse in time. However, she has a few things holding her back from that dream. First, she already has a husband who won’t let go. Second, she is involved with an unsavory lawyer who is threatening her existence if their truth were ever to get out. Third, Sarah has a secret involving the surly family pet. When her husband is found dead and possibly murdered in her marital home, Sarah quickly lures the police in Chris’s direction.

“Daisy Kennedy agrees to take Sarah on as a roommate with one condition, no pets. Daisy sees how Sarah manipulates the beefy cop with her lofty breasts. She wonders if a man like Chris could ever admire her like he does her sneaky, lying roommate. She had only one forbidden love in her young life, and that led to an unforgettable disastrous end.

“With their lives entangling with each other through love, hate, and betrayal, these characters only have their hopes and dreams to sustain them. If they can walk through that, they may find glory on the other side.”

Gilgen delivers a solid second installment that will bring readers an exciting thrill ride from start to finish.

Consumers can purchase “The Cop, the Paramedic, and the Barista” at traditional brick & mortar bookstores, or online at Amazon.com, Apple iTunes store, or Barnes and Noble.

For additional information or inquiries about “The Cop, the Paramedic, and the Barista,” contact the Christian Faith Publishing media department at 866-554-0919.