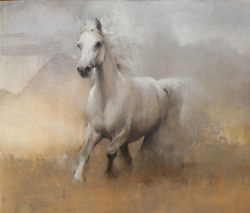 Animals are such an important and inspiring part of our Jackson Hole surroundings and these two artists beautifully depict these captivating creatures.

It’s going to be a big year for the Jackson Hole Fall Arts Festival, which celebrates 35 years in Jackson, Wyoming, solidifying its position as the premier cultural event in the Rocky Mountain West. Produced annually by the Jackson Hole Chamber of Commerce, the 12-day event takes place September 4 – 15, 2019. To honor its 35 years of exceptional art and creative events, the Fall Arts Festival committee has selected two Jackson Hole artists, painter Kathryn Mapes Turner and sculptor John E. Simms, to be featured for this year’s event.

“Of Earth & Wind” a painting by Turner, has been chosen as the featured artwork that will grace 2019 festival posters. The painting itself will be on display at Jackson’s historical Wort Hotel until it is auctioned off on Saturday, Sept. 14, following the QuickDraw event on Town Square. Simms will create a series of eight geometric bison sculptures from bronze and steel. Typically, the Jackson Hole Fall Arts Festival selects one painter as the featured artist, but every five years the festival adds a featured sculptor with Simms as the second sculptor ever to be featured.

“In honor of our 35th anniversary, we decided to feature two artists as we did in 2014 for our 30th. We selected two very popular and accomplished local artists and are thrilled to share their work with festivalgoers,” says Maureen Murphy, director of special events for the Jackson Hole Chamber of Commerce. “We selected Kathryn’s majestic painting of a galloping horse with a moody Teton backdrop as our featured painting, capturing the independent spirit Jackson Hole is known for. And for our featured sculpture, John’s bison series offers a contemporary abstract form that strongly evokes that iconic symbol of the West. Animals are such an important and inspiring part of our Jackson Hole surroundings and these two artists beautifully depict these captivating creatures.”

Kathryn Mapes Turner is a fourth-generation Jackson native known for her exquisite work in oil and watercolor. Her longtime love of landscapes, mountains and wildlife is evident in her extraordinary body of award-winning work. Growing up on a ranch in Grand Teton National Park, surrounded by its dramatic light and remarkable natural composition, helped shape Turner’s aesthetic as well as an intimate appreciation for art from childhood. Turner has long admired and looked up to the Fall Arts Festival’s featured artists: “They were all my heroes. They were all people that I looked up to throughout my career. So this is a real coming-of-age honor,” Turner recently told Jackson Hole News & Guide. Turner’s work is represented by Turner Fine Art in Jackson.

Turner credits her inspiration for “Of Earth & Wind” to one of her favorite sights at her family’s Triangle X Ranch. Each night in the summer, a herd of close to 100 horses gallop out to pasture beneath the clouds in a remarkable display that she set out to capture on her featured painting for the Jackson Hole Fall Arts Festival.

As an artist, John E. Simms, also a Jackson Hole local, is known for his talent in creating contemporary metal works in very large – and, more recently, small – scales. His larger pieces are fabricated from steel or aluminum plate, while stainless steel, silicon bronze and copper are often used for smaller works. Simms is creating an abstract series of eight geometric bison sculptures for his featured Fall Arts Festival work. The free-standing metal sculptures will be roughly 28 inches wide, 16 inches tall and 2 inches deep.

Simms was always intrigued by the possibilities inherent in the most basic of forms: circle, triangle and rectangle – and his mathematical engineering mind turned to sculpture in 1990 after a successful career as inventor, businessman and inveterate outdoorsman. His large-scale pieces have been featured as public art in Wyoming, Idaho, Washington and Oklahoma. Simms’ work is now represented by the Diehl Gallery in Jackson.

Simms' success as an artist is preceded by a remarkable history as an innovator, dating back to his early days as a ski bum, when he used his experience to turn entrepreneur, creating his industry-changing invention of the avalanche probe and shovel device called Life-Link, which helped save lives of backcountry skiers. And a later creation, Gravel Guards, evolved into the first neoprene waders for fly-fishing with Simms eventually going on to found Simms Fishing Products.

The second featured artwork for the Jackson Hole Fall Arts Festival will be a series of eight abstract bison sculptures created from bronze and steel by sculptor John Simms.