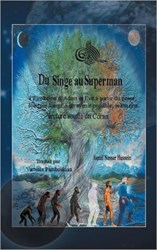 “The evolution of all species on this planet has reached its summit except for humans,” says Hussein. “Man can keep evolving, spiritually, to endless limits.”

In “Du Singe au Superman,” Hussein explores what he calls “the evolution of Adam and Eve.” He explores evolution and creation, or intelligent design, simultaneously explaining how human beings’ similarities with animals suggest a common ancestor. He goes on to contend that the differences between man and animal suggest the possibility of humans achieving a supernatural level of evolution.

“Even though we descended from apes, every one of us has the potential to be a superman,” says Hussein. “And there is a way for that.”

“Du Singe au Superman” shares Hussein’s ideas about evolution and spiritual potential. For anyone interested in exploring where humans have been, where they are now and where they are going, this is an insightful and intriguing read.

About the Author
Jamal N. Hussein earned a Ph.D. in theoretical particle physics and is a professor of theoretical physics and the philosophy of science. Outside of his professional expertise, his main focus of interest is in the relationship between religion and science, epistemology, the scientific study of the so-called paranormal phenomena and philosophy of physics.