James Brouillette’s newly released “Angels or Aliens?” is a page-turning exposition on the theory of extraterrestrial involvement in biblical history.

“Angels or Aliens?” from Christian Faith Publishing author James Brouillette is an erudite narrative that tackles the notion of physical alien intervention to explain the Christian faith’s spiritual doctrines. 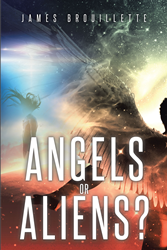 “Angels or Aliens?”: an illuminating book that delves into the idea that extraterrestrials, not mystical forces, are involved with the universe’s architecture, challenging the established belief of God’s omnipotence. “Angels or Aliens?” is the creation of published author James Brouillette, a businessman, college professor and administrator, minister, and Bible student and teacher.

Brouillette shares, “Join the journey and examine the mysterious physical remains present on earth that are being used to mount a new attack against Christianity. The reason for these ancient remains’ existence here on this planet is explained using scripture. ‘Angels or Aliens?’ explores giants, flying vehicles, and angels as they are discussed and explained in the Bible and how they relate to the coming assault against Christians everywhere by this new theological lie. This new false doctrine is explored, which is now being prepared and developed in order to replace the theory of evolution as the godless answer to mankind’s origin. This unique look at the modern world, from a biblical point of view, provides a positive Christian vision and reinforces the fact that God is in control and through Christ the victory is ours. In addition, through the process the reader is exposed to some possible end-time scenarios that they may not have previously imagined.

“After studying the media and the communication in which it engages, Brouillette has identified a systematic indoctrination that has taken place over the last sixty years, in the area of the existence of life on other planets, and ‘Angels or Aliens?’ exposes this newest attack against the Christian belief that our world was created by God. Using Scripture, this new humanist attack is debunked, and the relationship this new theory might have with end-times prophecy is exposed.”

Published by Christian Faith Publishing, James Brouillette’s new book is both an argument and testament that dispels misguided studies aimed at digressing the truth that is God and the supernatural in the epoch of reality.

This book contains thought-provoking points inspired by scriptures that attest to the existence of God in life.

View the synopsis of “Angels or Aliens?” on YouTube.

Consumers can purchase“Angels or Aliens?” at traditional brick-and-mortar bookstores or online at Amazon.com, Apple iTunes store, or Barnes and Noble.

For additional information or inquiries about “Angels or Aliens?” contact the Christian Faith Publishing media department at 866-554-0919.