James Lloyd’s Newly Released “Keys: Portraits of Trials and Truth” Is a Profound Trilogy that Shows How God’s Grace Unravels the Goodness Within an Individual

“Keys: Portraits of Trials and Truth” from Christian Faith Publishing author James Lloyd is a captivating collection of narratives about freeing from the chains of pride, conceit, low self-esteem, fears, and much more; as it centers around characters who each have a different story to tell of their encounters in life. 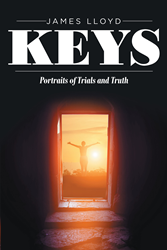 “Keys: Portraits of Trials and Truth”: a brilliant compilation of different journeys of realizations and witnessing God’s grace. “Keys: Portraits of Trials and Truth” is the creation of published author James Lloyd, a semiretired quality control and safety manager. When he was a communications specialist in the military during the Vietnam era, slow nights urged him to begin writing poems about the state of the country and the world as he saw it.

Lloyd shares, “Keys: Portraits of Trials and Truth is fitting as the title for this trilogy of fictional short stories because of how the grace of God unlocks the door to the goodness within the heart of each central character. Their experiences allow them to become free from the bonds of pride fullness, self-indulgence, low self-esteem, the fear of failure, as well as egomania and cynicism.

“In Waiting, Paul has become an impatient, status-driven millennial who seems to only be concerned about how best to advance his career after losing the one person that helped keep him morally centered. The change in his personality since losing her has alienated him from close friends and family in favor of less reputable characters. Then one day when he feels his days may be numbered, he meets an old military veteran in the most unlikely of circumstances, and what follows would change his life forever.

“In Will to Soar, Will Saxby agonizes over what he feels is his ‘fatal flaw’ and can’t get past a low opinion of himself, even though he is surrounded by friends and associates in his life that see him entirely differently. When he decides to make a last ditch effort to post for his dream job with help from his mentor and other associates, he is also aided by the dramatic appearance of characters whose own tragedies make his problem seem miniature in scope but whose testimonies and council allows him to see, in dramatic fashion, the man God also sees in him.

“Inside the Orchard is a story about an overachiever who also suffers from egomania. Edith is so driven that she has become one-dimensional and fixated on a romance with one of her law school professors that can never be realized. She is an A-lister and academic powerhouse by reputation, whose cynical and manipulative nature becomes her calling card. However, she’s forced to see the world through the eyes of someone who is the polar opposite in appearance and disposition. Someone who is gifted in her own right who chooses to align herself with Edith, in spite of her attitude toward her, because of something quite remarkable that they both share.”

Published by Christian Faith Publishing, James Lloyd’s new book is a potent account of fictional characters whose lives have experienced the power of God’s love and grace in their own struggles and troubles in life that readers will find inspiring and enlightening.

View a synopsis of “Keys: Portraits of Trials and Truth” on YouTube.

Consumers can purchase “Keys: Portraits of Trials and Truth” at traditional brick & mortar bookstores, or online at Amazon.com, Apple iTunes store, or Barnes and Noble.

For additional information or inquiries about “Keys: Portraits of Trials and Truth,” contact the Christian Faith Publishing media department at 866-554-0919.