Recent Release “The Murder Trial of JFK" from Page Publishing author James O. Chipman is what you have been waiting to read for 58 years.  Of course, if it came out in 1963, he would have been murdered and all of his research notes destroyed which is what happened to "What's My Line" panelist and journalist Dorothy Kilgallen. 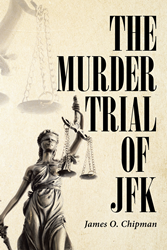 James O. Chipman has a master's degree in history and worked for 28 years as an archivist at the Colorado State Archives.  He spent over 50 years in researching his new book "The Murder Trial of JFK":  a gripping tale and potent story describing what actually happened to JFK and how his death altered the world.

Listen to the witnesses who were not allowed to testify in 1963 or had their testimony changed by the FBI and then make your verdict.  Abraham Bolden was a Secret Service Agent and he testified that on November 2, 1963 they tried to kill Kennedy in Chicago, then again on November 18th in Tampa and finally in Dallas where some of the assassins used Secret Service ID.

Ed Hoffman was at Dealey Plaza 45 minutes before Kennedy got there.  He saw a gunman take a shot at JFK from the grassy knoll behind the fence and then handed the rifle to his partner who broke it down and placed it in a case.

Gordon Arnold was just out of boot camp in the army and was still in his uniform.  A Secret Service impostor showed him his ID and told him he was not allowed to stay there on the grassy knoll.  Just then a bullet was fired from a rifle behind him and went right past his left ear.  He instinctively hit the deck. His camera was confiscated and never returned.

Hoover of the FBI decided in less than two days that Oswald was the killer and ignored all the other witnesses who said otherwise.  He had spent the last thirty years building up the reputation of the FBI and operated with the directive of "Do not embarrass the FBI."

He had to have a quick conviction with an open and shut case.  What do you suppose America and the world would have thought if it was revealed after an extensive investigation that the FBI had Oswald under surveillance before JFK was killed and that both Oswald and Ruby were paid informers for the FBI?  It would have also shown that the FBI was using illegal wire taps and break ins in many of its investigations.

You have to ask yourself three questions:  Why was Kennedy killed?  Who benefitted?  Who has the power to cover it up?

Lyndon B. Johnson, Kennedy's vice president, was going to be dropped from the ticket in 1964 and he was going to go to jail because of his scandals with Bobby Baker and Billie Sol Estes which were being revealed by Bobby Kennedy in an expose' in "Life" magazine the week after JFK was killed.  LBJ opted instead of going to jail and being nationally disgraced to becoming president of the United States.  It was a coup d'etat.

After almost sixty years, it is time for the world to know the truth behind the death of JFK.  If Kennedy had won reelection in 1964, there would not have been an American Vietnam War.  You will learn things about Lyndon B. Johnson that you would not believe were possible.  John F. Kennedy's assassination started a deep distrust that Americans have with their government that continues to this day. A major part of this distrust happened because the government lied to us about the assassination and lied to us about the Vietnam War. This book will tell you what really happened on November 22, 1963.

Readers who wish to experience this fascinating work can purchase “The Murder Trial of JFK” at bookstores everywhere, or online at the Apple iTunes Store, Amazon, Google Play, or Barnes and Noble.