“God Punched Back: Knocking Out the United States Government to Set People Free” from Christian Faith Publishing author Jane Northrup Glenn is a profound read that will illuminate man of what God’s truths are and how one can distinguish them from many of the world’s deceptions looming around as they are nearing the end times. 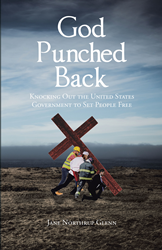 Glenn shares, “Imagine the Lion of Judah throwing a knock-out blow to the political parties, effectively and permanently releasing God’s people from bondage.

“Author, Jane Northrup Glenn is married to Darryl Glenn, 2016 Colorado Republican nominee for US Senate. The couple divinely met and married during the general election that year. Darryl delivered a fiery prime-time speech at the Republican National Convention in Cleveland and key phrases from his speech lay out the messages in this book. Jane shares her personal story of transformation from a Jesus lover that couldn’t pray her way out of a paper bag to a powerful intercessory vessel through whom the Lord protects and redirects the lives of others.

“There is increased activity in the supernatural realm as we move closer to the thousand-year reign of Jesus, and the government and political arenas are hot spots. It’s more important now than ever that a political party should not be a Christian’s strongest influence in determining how to vote and what position to take on issues. Complete submission and obedience to Jesus Christ alone is the guide.

“God Punched Back is written with an encouraging style to convey an urgent and important message from God. Deceit will be thick heading into the end times, and the Holy Spirit is helping us discern what is from Him.
“Because the oppressed are special to the Lord, the battle over them will increase, and angels and demons will throw even harder blows to determine what their futures look like. We will see a greater movement of God to separate church and state. Wickedness is on its way, and it will be dispensed through the government to anyone who has a financial tie to it.

“God Punched Back is an overview of messages that will be subsequently revealed in more detail later.”

Published by Christian Faith Publishing, Jane Northrup Glenn’s new book is a thought-provoking creation that is written to encourage man to act upon God’s words and strengthen one’s faith in Him as they battle deception and see through the acts of sin.

View a synopsis of “God Punched Back: Knocking Out the United States Government to Set People Free” on YouTube.

Consumers can purchase “God Punched Back: Knocking Out the United States Government to Set People Free” at traditional brick & mortar bookstores, or online at Amazon.com, Apple iTunes store, or Barnes and Noble.

For additional information or inquiries about “God Punched Back: Knocking Out the United States Government to Set People Free,” contact the Christian Faith Publishing media department at 866-554-0919.