Romance novelist Janelle Walden pursues her passion for the supernatural with a brand new saga in 'Til the Darkness Takes Us: Book 1. 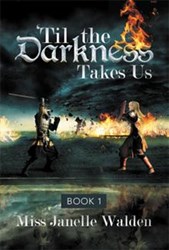 From Janelle Walden, the romance fiction novelist who reawakened the passions of readers with Fear vs. Love and The Heart’s Home, comes a brand new fantasy fiction about werewolves and other mythical beings, titled 'Til the Darkness Takes Us: Book 1. Walden’s foray into this genre is largely inspired by HBO’s "Game of Thrones" due to the TV series’ incredibly large cast of intriguing, well-developed and very human characters. This newly published book is Walden’s own endeavor at delivering a similar experience to her avid and first-time readers.

Book 1 showcases a huge cast of over 70 characters who live in a much darker and more supernatural version of the real world, in a wooded community of werewolves and the downtown area of the nearest city to that community loosely based on Philadelphia.. Readers will see the very human struggles of those who are not quite human themselves or who are surrounded by those who are not. The storyline is an attempt to humanize the supernatural world in a way that is unbiased toward any particular group or type of creatures.

For this very first installment of an envisioned series, Walden mainly introduces the grand cast of characters by gradually unveiling little portions of their backgrounds and storylines. She singles out, however, the two that are most easy to feel for: a teenage couple who are related to and live among werewolves, and caught between conflicts that arise due to their upbringing. Other characters are and will be featured more throughout the series.

‘Til the Darkness Takes Us is a gripping supernatural novel that bespeaks the need or desire for love, wealth, power, riches, or simply survival. With its own array of captivating characters and unique plot for a gripping series, Walden’s third book is a highly creative attempt to offer readers an entertaining escape from the real world through occult and supernatural events, horror and fantasy themes, all seamlessly blended into a saga.

About the Author
Janelle Walden has been writing books of multiple genres since age 12. Her debut romantic fiction, titled Fear Vs. Love, was published in 2001. The second of the same genre, The Heart’s Home, was published almost a decade later. She began writing simply out of boredom and a desire to escape from a painfully mundane world that severely lacked many "happily ever after" sort of endings. She continued writing into adulthood in pursuit of a better or more interesting world that could only be found by creating it and putting it down on paper for others to enjoy as well. Continuing this tradition, her writing has since veered into even more interesting genres such as science fiction, fantasy, and supernatural, which is what her most recent work is. The newest addition to her body of work is the first book in a supernatural series, titled ‘Til the Darkness Takes Us, the first installment of which will be available to readers in summer or fall of 2013.