Through the actual journaling and writings of one man, new memoir reveals the atrocities and horrors of the Bataan Death March and the Japanese POW camps as well as how he survived to live a Christian life 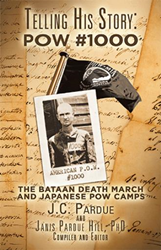 Janis Pardue Hill, PhD announces her entry into the publishing scene with the release of “Telling His Story: POW #1000” (published by LifeRich Publishing), a memoir that reveals, through the actual journaling and writings of her father, POW #1000, the atrocities and horrors of the Bataan Death March and the Japanese POW camps.

As primarily a compiler and editor, Janis provides the details of her father, J. C. Pardue’s story. This memoir covers both his entry into the U.S. Army Air Corps and his experiences in, and after, World War II: the battle to hold Bataan; the surrender of Bataan; the brutal, inhumane treatment on the Death March and in the POW camps; as a slave in Japan, and as a survivor determined to live a Christian life.

“This story is one of survival under the most challenging, seemingly impossible odds. It's a story of triumph over an evil empire and a military so indoctrinated they gladly committed ‘hari kari’ for their emperor, a man they had never seen and whose voice they had never heard until his surrender speech after the atomic bomb was dropped on Nagasaki. He was their god,” Janis says. She adds, “I also believe a great many Americans are interested in World War II and its effects on the United States, as evidenced by the success of many movies on the subject. I'm also optimistic enough to believe that a large number of the Baby Boomer generation, the children of ‘The Greatest Generation,’ have passed on their patriotism and love of freedom to their descendants.”

When asked what she wants readers to take away from the book, Janis answers, “A continued appreciation for a remarkable group of soldiers accurately labeled "The Greatest Generation," who "dug in," persevered, and never gave up in the fight for their beliefs in the ideals on which our country was founded. An understanding of war and evil from one man's perspective, his individual determination to survive, and the fact that every soldier's story is valuable and worthy to be told. An appreciation for the story of the miracle of my father's Bible and the faith he acquired and absorbed from the weapon he considered the most valuable of all--his Bible.” For more details about the book, please visit https://www.liferichpublishing.com/en/bookstore/bookdetails/839540-telling-his-story-pow-1000

Janis Pardue Hill, PhD, a retired university professor and lifelong educator, holds a BS in English education, an MA in literature, and a doctorate in curriculum theory. She has worked in secondary and university classrooms, as a program coordinator in the Louisiana Department of Education, and as a curriculum coordinator in the Ouachita Parish School System. She and her husband, Charles A. Hill, Jr., have two children and three grandchildren and live in North Louisiana.

LifeRich Publishing, the strategic publishing partnership of Reader’s Digest and Author Solutions, LLC, was created to provide all writers a platform for sharing their stories, recipes, advice and more. LifeRich authors will benefit from a wealth of editorial design, marketing and education resources, specially created by Reader’s Digest editors for the enrichment of these LifeSmart individuals. Books can be published in print, ebook or audio formats, with additional distribution to up to 25 million Reader’s Digest customers through its online properties. For more information or to publish a book, please visit liferichpublishing.com or call 844-686-9607.