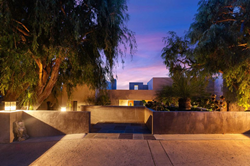 “Touchdown! Brady-Bundchen Home Is Sold”
The second time proved a winner as the Tom Brady and Gisele Bundchen suburban Boston mansion has sold. Recently returned to the market after a trial run in 2019, the Brookline five-bedroom home quickly sold. The sale price is believed to be close to the asking price of $33 million. The in-the-money couple also made a big profit on a New York apartment they just sold for $40 million. And also recently paid over $17 million for a tear-down home near Miami Beach, where they plan to build their dream home.

“L.A. Mansion To the Stars Sold”
An L.A. mansion known as Owlwood that has been home to Sonny & Cher, Tony Curtis and Marilyn Monroe has sold for $88 million. Owlwood was on the market for several years, priced as high as $180 million.

“Was Once Mitt Romney's Utah Mountain Home”
Mitt Romney's former Park City mountain home is on the market asking $15.5 million. With over 12,000 square feet and 16.5 acres, the log-cabin-style home is convenient to Park City's winter activities, restaurants and shopping.

“New Multi-Million LA Mansion Faces Wrecking Ball”
L.A. developer Mohamed Hadid, father of Gigi and Bella Hadid, is trying to sell a partially-built Bel Air mansion that the county has ordered him to demolish. According to multiple sources, Hadid built the 30,000-square-foot home on a 1.2 acre lot without proper permissions. The asking price is $8.5 million, which will be used to pay for the demolition.

“Cindy Crawford Jumps On Florida Train”
In what seems to be an exodus of celebrities and CEOs who are or may be ditching New York, Massachusettes and California for the Florida sunshine, Tom Brady and Gisele Bundchen; Joshua Kushner and Karlie Kloss; Ivanka Trump and Jared Kushner; and Jennifer Lopez and Alex Rodriguez have recently bought homes or land in the Miami Beach area. Now Cindy Crawford and Rande Gerber have joined the crowd.

“Will Rogers and Michelle Pfeiffer Home”
A Pacific Palisades home that once belonged to Will Rogers and later owned by Michelle Pfeiffer and David E. Kelley is for sale at $19.999 million. The current owners worked with Michael S. Smith, the interior designer who worked with the Obamas on several White House projects, to expand the property. The four-acre property includes the main house, pool house, staff house, stables which were converted into an expansive gym, and a newly constructed two-story guest house. The home is listed with Aaron Kirman, Liz Gottainer and Jeeb O'Reilly of the Aaron Kirman group at Compass.

“Hemsworth Brothers Malibu Home”
A Malibu home which was owned by Luke, Liam and Chris Hemsworth just sold for $4.25 million. The Hemsworth brothers purchased the property in March 2016 as a family home near the ocean and mountains. Eric Haskell of The Agency represented the sellers while Chris Cortazzo and Susan Saul represented the buyer.

“Shark Tank's Robert the Flipper”
Shark Tank's Robert Herjavec is not only a shark on television, he is also a real estate player in Hidden Hills, California where he is trying to flip a mansion he bought in 2019. Robert is asking $17.25 million for the seven-bedroom main home plus a guest house. He paid $14.6 million.

“Kelly Clarkson Relists Tennessee Lake Home”
Kelly Clarkson has reduced the price on her seven-bedroom Tennessee lake home from $7.49 million to $6.95 million. The 20,121-square-foot home is located on four acres with a long-gated driveway to the entrance car park with center fountain. Grounds are dotted with mature trees, lots of emerald lawn, a sand volleyball court, English-style gardens, a conservatory/greenhouse and large pool/spa terrace with pavilion for outdoor dining with fireplace. The listing agent is Jack Miller with PARKS Real Estate, Nashville.

“Hilfigers On Same Greenwich Page”
Although they split years ago, Tommy and Susie Hilfiger seem to be on the same page for their Greenwich real estate. The former Mrs. Hilfiger just put her 1700's-era Greenwich mansion that comes with a Mount Vernon-replica playhouse for children on the market for $40 million. Tommy Hilfiger is selling his own historic Greenwich mansion on 22 acres for $45 million.