JARSTY Launches to Offer Simple Way to Cook, Store and Reheat Meals for Up to Two Weeks

JARSTY is a patent-pending all-in-one cooking system that allows people to cook, store and transport their meals using just one container 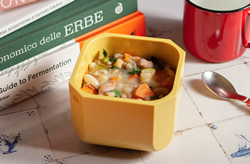 JARSTY allows people to cook delicious and nutritious meals using just a microwave. The closed cooking system locks in the flavors, allowing them to intensify rather than dissipate when the pot lid is opened.

Simplify cooking with JARSTY, an all-in-one system for cooking, storing and transporting meals for up to 15 days. Launching today, JARSTY requires only a microwave to cook meals from raw ingredients.

Cooking nutritious meals at home is often a healthier alternative to dining out, but it can be time-consuming, messy and lead to a sink full of dishes. According to the USDA, the average American spends roughly 37 minutes a day preparing and serving food and cleaning everything up.

JARSTY simplifies the process. Make a meal in less than 30 minutes, with minimal dishes and effort. Simply add raw ingredients into JARSTY, place the lid on top and open the valve. Pop it in the microwave, and after 5 or 6 minutes, JARSTY can come out of the microwave and be set aside for 15-20 minutes with the valve closed. Eat the meal right away or store it conveniently in the fridge for up to 15 days. Warming up meals takes only one to two minutes in a microwave.

“JARSTY allows people to cook delicious and nutritious meals using just a microwave,” said creator Luca Luigi Rodella. “The closed cooking system locks in the flavors, allowing them to intensify rather than dissipate when the pot lid is opened. The vacuum and the natural process that happens inside JARSTY means a decrease in microbial growth and enzymatic oxidation. This keeps meals fresh for up to 15 days.”

With only a microwave needed, people in hotel rooms or in college dorms can enjoy a healthy homemade lunch or dinner easily, instead of relying on restaurants or other dining options.

JARSTY is a great option for picky eaters and people with allergies or intolerances. Every meal can be tailored to fit their needs by using approved-ingredients only. Even those with limited prowess in the kitchen will find JARSTY easy to use. JARSTY includes hundreds of easy-to-follow recipes. Simply select a recipe, prep ingredients, throw them into JARSTY and cook in the microwave.

JARSTY weighs less than one pound and is compact, leakproof and dishwasher safe. JARSTY is the ultimate tool for packing a healthy meal. It stores easily in a lunch bag, backpack or cooler and is made of 100% recyclable plastic materials.

JARSTY is available in four colors: blue, dove, green and yellow. It weighs less than one pound. JARSTY starts at €44.00 and can be pre-ordered at pr.go2.fund/jarsty.

About JARSTY
JARSTY is an all-in-one cooking system. People can cook, store and transport their meals for up to 15 days. Luca Luigi Rodella created JARSTY during COVID-19 lockdowns in Italy. Instead of eating prepackaged meals at work every day, Rodella created JARSTY to enjoy delicious meals and cut down on cooking. For more information, visit https://jarsty.com/.