“The Head Case” from Christian Faith Publishing author Jason Luckasevic is an in-depth narrative that delves into the brain injury litigation of former NFL players and a trial lawyer against the foundation. 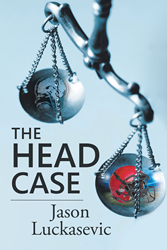 “The Head Case”: an educative account on the enormous lawsuit of a young lawyer and former football players against the NFL regarding the perils of brain damage. “The Head Case” is the creation of published author Jason Luckasevic, a trial lawyer headquartered in Pittsburgh who maintains a full-time litigation practice to help individuals with serious injuries caused by other individuals or corporations.

Luckasevic shares, “The National Football League was sued for hiding the dangers of brain injury from their former players from an unlikely source. A young trial lawyer from Pittsburgh, Jason Luckasevic, stood up against the NFL with the backing and faith of the former players. The result ended up in a settlement expected to pay out in the billions of dollars to many players suffering and dying from brain damage.

“Despite all the efforts to silence him, this story tells the truth behind the NFL lawsuit. You will learn how this case came about and how it almost never happened. With his faith, determination, and beliefs, Jason Luckasevic was able to overcome the insurmountable odds. His efforts have shaped litigation in the country for the next century.”

Published by Christian Faith Publishing, Jason Luckasevic’s new book discloses the truth surrounding the brain injury case against the NFL and how one determined young lawyer, with the full aid of the victims, made a huge impact and gave justice to those suffering.

“The Head Case” is a riveting opus that presents the author’s fruitful efforts to hold the NFL liable for withholding and causing brain damage to their players.

View the synopsis of “The Head Case” on YouTube.

Consumers can purchase “The Head Case” at traditional brick-and-mortar bookstores or online at Amazon.com, Apple iTunes store, or Barnes and Noble.

For additional information or inquiries about “The Head Case,” contact the Christian Faith Publishing media department at 866-554-0919.