Jason Randazzo’s new book “Just Another Day" explores a sequence of investigations and arrests, and also looks at interactions with a number of individuals on both sides of the law, including a childhood friendship with a man who rose to be the right hand of the boss of the Gambino crime family, John Gotti, Jr. 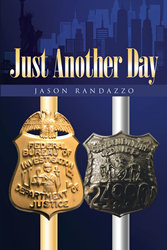 Jason Randazzo, retired law enforcement and FBI, has completed his new book “Just Another Day": a gripping work that is geared toward individuals who have a taste for true crime stories (including stories of Italian organized crime figures) that are entwined with events involving a special agent of the FBI during the course of a twenty-eight-year career.

Randazzo writes, “I would also like to thank the NYCPD for allowing me the opportunity to gain valuable experience with many situations with both the best and worst of humanity and gave me the ability to have a sense of calmness in the face of unfamiliar, and sometimes adversarial, places and situations. And finally to my mentor, Anthony John Nelson, who drafted me into the venerable Squad C-9, known at that time as the Fugitive Squad of the New York Office. Anthony later became the supervisor of the Truck Hijacking Squad before taking over the NYPD/FBI Joint Bank Robbery Task Force. He was a guiding influence not only on the way of investigating crimes but also on treating victims in such a way that, even though you may not be able to make them feel whole again through the process of the criminal justice system with an arrest and/or a conviction, you can still show them true empathy so they understand that, although they may not find justice in the end, someone does care. That can mean more than anything.”

Published by Page Publishing, Jason Randazzo’s riveting book begins with an evolving saga that involves the struggles growing up in a rough neighborhood.

The neighborhood in question was affected by the violence of the crew of associates of John Gotti, Sr. The author then takes you through episodes experienced during six years as a cop in the high-crime areas during the 1980’s in Harlem and Washington Heights. And the life story culminates with the author working with the special agents that brought down Gotti in the 1990’s.

Readers who wish to experience this inspiring work can purchase “Just Another Day" at bookstores everywhere, or online at the Apple iTunes Store, Amazon, Google Play, or Barnes and Noble.

Page Publishing is a traditional, full-service publishing house that handles all the intricacies involved
in publishing its authors’ books, including distribution in the world’s largest retail outlets and royalty
generation. Page Publishing knows that authors need to be free to create, not mired in logistics like
eBook conversion, establishing wholesale accounts, insurance, shipping, taxes, and so on. Page’s
accomplished writers and publishing professionals allow authors to leave behind these complex and
time-consuming issues and focus on their passion: writing and creating. Learn more at
http://www.pagepublishing.com.