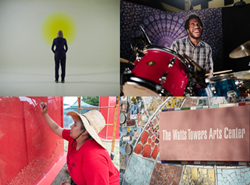 KCET, Southern California's home for award-winning public media programming, announced today the return of the KCET Original Emmy® award-winning arts and culture series ARTBOUND. The eleventh season of the series kicks off with an examination of the art world’s light and space movement and features notable artists Robert Irwin, Larry Bell and Helen Pashgian. Upcoming episodes from the new season include The Watts Towers Arts Center as the creative hub of a community, a city-wide public art triennial around the topic of food and a new west coast sound that has been created in the tradition of jazz. ARTBOUND examines the lives, works and creative processes of arts and culture innovators making an impact in Southern California and beyond. The new season will premiere on Wed., Sept. 30 at 9 p.m. PT on KCET and will subsequently air Fri., Oct. 2 on PBS SoCal at 8 p.m. PT and Tues., Oct. 6 on Link TV (DirecTV channel 375 / Dish Network channel 9410) at 10 pm ET/PT.

The new season of ARTBOUND will be included in a robust Wednesday night of programming for KCET designed to highlight the resilience of the arts community. Under the theme “Create Wednesday,” the schedule will also feature popular Arts and Culture programs that have previously aired on KCET and PBS that include IN CONCERT AT THE HOLLYWOOD BOWL and student film showcase FINE CUT as well as America’s preeminent performing arts television series from PBS, GREAT PERFORMANCES. The lineup also includes the new local weekly series SOUTHLAND SESSIONS which celebrates the creativity and spirit of Los Angeles’ arts and culture communities by featuring a diverse spectrum of content from a variety of prominent voices from Southern California for up-close, virtual “sessions.”

This season of ARTBOUND will be telecast as follows (subject to change*):

“Light & Space”– Wed., Sept. 30 at 9 p.m. on KCET
A look into the art works of Robert Irwin, Larry Bell and Helen Pashgian and their exploration of perception, material, and experience in the Light and Space movement.

“The New West Coast Sound: An L.A. Jazz Legacy”– Wed., Oct. 7 at 9 p.m. on KCET
Growing up amongst jazz legends within the deep musical traditions of Leimert Park, drummer Mekala Session and his peers grapple with how to preserve this rich legacy—striving to carry forward the tenets that took root in the work of Horace Tapscott and his Pan Afrikan Peoples Arkestra. This is the story of Los Angeles’ emerging generation of community-focused black musicians.

“CURRENT:LA FOOD”– Wed., Oct. 14 at 9 p.m. on KCET
In October of 2019, through the Department of Cultural Affairs and the Institute of Contemporary Art, the city of Los Angeles hosted a city-wide public art triennial around the topic of food. Activating public parks throughout the city, artists created works to to spark conversation about what it means to live in Los Angeles and how to work together for a sustainable and hopeful future.

For updates, follow @KCET and #Artbound on social media.

ABOUT ARTBOUND
The critically acclaimed weekly television series and online destination ARTBOUND captures the spirit of the burgeoning arts and culture community in California and explores how it's shaping California as the creative capital of the world. The KCET Original series explores and illuminates the cultural issues of our times, providing critical in-depth analysis of how arts and culture affect society. The series and the online stories that are found at kcet.org/artbound are the result of cultural tastemakers throughout the region and collaborations with LA’s top cultural institutions. Since its inception in 2012, the series has earned high industry praise including several Emmy® Awards, LA Press Club awards, Golden Mike awards and a National Entertainment Journalism award, among others. ARTBOUND has been recognized with the prestigious ASCAP Foundation Deems Taylor / Virgil Thomson Multimedia Award for outstanding music.

ABOUT KCET
KCET is on-air, online and in the community, and plays a vital role in the cultural and educational enrichment of Southern and Central California. KCET offers a wide range of award-winning local programming as well as the finest public television programs from around the world. Throughout its 55-year history, KCET has won hundreds of major awards for its local and regional news and public affairs programming, its national drama and documentary productions, its quality educational family and children's programs, its outreach and community services and its website, kcet.org. For additional information about KCET productions, web-exclusive content, programming schedules and community events, please visit kcet.org. Select original programming from KCET is also available for streaming on Apple TV, YouTube, Amazon and Roku platforms. For more information please visit kcet.org/apps.