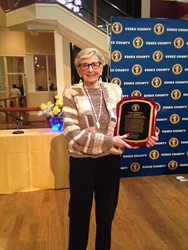 I really feel that I've learned and gained so much from being a long-time volunteer in the community. It surely has enriched my life.

Nan Samons has spent a lifetime giving back to others and serving the community. On May 11, it was the county’s turn to give to her, when Samons was honored as a 2016 Essex County Legend. The award, which is given by the Essex County Division of Senior Services, is bestowed upon older adults in recognition of their service. It was given as part of the 10th Annual Essex County Older Americans Heritage Month celebration, held at The Priory restaurant in Newark.

Samons, formerly of West Orange, was nominated as a Legend by Frances Bucien, the coordinator of the JCC MetroWest’s kosher congregate lunch program in South Orange, where she met the honoree. Samons now lives at South Orange B’nai B’rith Federation House, a senior living community owned and managed by the Jewish Community Housing Corporation of Metropolitan New Jersey (JCHC); the non-profit organization participates in the congregate lunch program.

“Nan and her SOS colleagues have come to the lunch program to promote volunteerism, computer literacy, joint initiatives with the students of Seton Hall University, and the South Orange senior discount card,” said Bucien. “This is a well- deserved honor.”

Her award was presented by Deborah Collins, Director of Small Business Development and Affirmative Action of Essex County. County Executive Joe DiVincenzo and Assemblywoman Sheila Oliver also attended and spoke at the ceremony. Samons was recognized as a founding member of South Orange Seniors (SOS), a group dedicated to improving the lives of older adults in South Orange, as well her other community service. East Orange resident, Inez Elliott, also received an award.

Samons, who was characteristically humble about the recognition, said that, “I really feel that I’ve learned so much and gained so much from being a long-time volunteer in the community. It surely has enriched my life. One of the biggest rewards has been my work with SOS.” The organization was instrumental in getting the senior discount card initiated with area merchants and it works with town officials to advocate for the needs and interests of seniors in town.

She previously served on the boards of both Jewish Family Service Association and Jewish Child Care, which eventually merged to become Jewish Family Service; she was a fundraiser and speaker for the United Jewish Appeal (UJA), and served many local organizations and initiatives throughout the years.

Sixty years ago, Samons co-founded Playhouse Nursery School in West Orange, a cooperative preschool that she said “made a major dent in the community.” After she retired at age 82, she decided to volunteer at Saint Barnabas Medical Center’s same-day surgery center, serving as a liaison between patients and their families and physicians. She also teaches knitting at the public library and walks three to four miles a day.

“I mentioned to an SOS colleague that I should really cut back a little but she replied that I’d find something else to do instead. I’m truly very lucky,” she said.