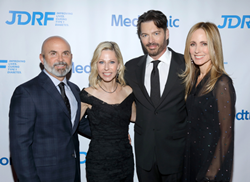 With JDRF, we found an all-star team together with a community of experts, parents, advocates and answers to questions. This is what a cure looks like.

To download photos from the event, please visit http://bit.ly/2DACwMz

Said Judy Ranan, Executive Director of JDRF Greater Los Angeles, “We appreciate all the friends and supporters who shared this special evening with us. It was a room full of warmth, hopes and generosity. Together we raised over $1 million with the goal of support cutting edge research to find a cure for type 1 diabetes.”

Highlighting the gala was a performance by Harry Connick, Jr. and his band. To the delight of all in the room, Connick invited to the stage from the audience a number of children with T1D, praised their courage and strength, and mentored them in real time to deliver a moving performance of “You Are My Sunshine.”

Adam Stewart presented Marc and Robyn Sidoti with the JDRF 2019 honor for their dedication to the JDRF’s vision of finding a cure and for their leadership and commitment to the cause. When their daughter Juliet was diagnosed at seven years old with T1D, Marc and Robyn made it their mission to help eradicate the disease. Marc is a board member of JDRF LA Chapter and Robyn is a member of the Imagine Gala committee. The Sidotis are also passionate supporters of JDRF Los Angeles One Walk, they started their team, Hoolie’s Heroes in 2017 to honor their daughter.

“We are thrilled to be honored by JDRF for a mission that means so much to our whole family. Thank you for helping us make a difference in the lives of all those living with T1D,” said Marc Sidoti.

“With JDRF, we found an all-star team together with a community of experts, parents, advocates and answers to questions. This is what a cure looks like,” added Robyn Sidoti.

The evening culminated with the JDRF’s signature call-to-action, Fund A Cure with the help of a number of children with T1D. Fund A Cure is a unique opportunity for 100% of donations received to go to ground-breaking research. Since its inception in 1970, JDRF has funded virtually every major breakthrough in diabetes research. The path to a cure for diabetes is as complex as the disease itself, but tremendous progress is being made daily and the goal is in sight. This year’s Fund A Cure raised more than $550,000.

About JDRF:
JDRF is the leading global organization funding type 1 diabetes (T1D) research. Our strength lies in our exclusive focus and singular influence on the worldwide effort to end T1D. We are improving lives today and tomorrow by accelerating life-changing breakthroughs to cure, prevent, and treat T1D and its complications.

JDRF has led the search for a cure for T1D since our founding in 1970. In those days, people commonly called the disease “juvenile diabetes” because it was frequently diagnosed in, and strongly associated with, young children. Later, to emphasize exactly how we planned to end the disease, we added a word and became the Juvenile Diabetes Research Foundation. Today, we know an equal number of children and adults are diagnosed every day. Thanks to better therapies, which JDRF funding has been instrumental in developing and making available, people with T1D live longer and stay healthier while they await the cure.