Top musicians will perform in the Friends of Jeff Golub All-Star Memorial Benefit Concert at B.B. King's Blues Club in NYC on January 21, 2015 at 8pm to benefit the Golub family; tickets are on sale now at MarqueeConcerts.com and Ticketmaster.com. 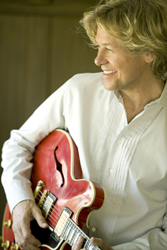 Jeff, his wife Audrey, and sons Chris and Matthew greatly appreciate the support of his friends and fans and look forward to a wonderful evening of music and friendship.

UPDATE: We are deeply saddened by the January 1 passing of Jeff Golub. The show will take place in Jeff's memory and will benefit his family.

Marquee Concerts is pleased and grateful to announce that a stellar line up of musicians will perform in the Friends of Jeff Golub All-Star Benefit Concert at B.B. Kings Blues Club and Grill in New York City's Times Square on Wednesday, January 21, 2015 at 8pm to raise funds on behalf of Jeff and his family.

Ohio-born Jeff Golub has called New York City home for nearly 4 decades. The contemporary jazz and blues guitarist has released 11 solo albums as well as 3 CDs as the leader of the instrumental band Avenue Blue. His most recent releases include 2011’s blues CD, “The Three Kings” with the Jeff Golub Band and featuring Henry Butler on vocals and keyboard and 2013’s “Train Keeps A Rolling” with Brian Auger. The contemporary jazz and blues guitarist is also well known for his work with Billy Squier as well as Rod Stewart, performing with Stewart on four albums and five world tours.

Although losing his sight in 2011, Jeff continued to perform through 2013 and then began to experience a rapid decline. This past October, doctors discovered Golub is suffering from Progressive Supranuclear Palsy (PSP), a degenerative brain disease that has no cure. PSP is untreatable and aggressive. Now that the disease has started to adversely affect Jeff's balance, speech, and control of his body, his days of performing and recording are likely behind him.

"We are proud to be mounting this benefit show to help our friend Jeff Golub,” notes Bill Zafiros, cofounder of Marquee Concerts. “Jeff, his wife Audrey, and sons Chris and Matthew greatly appreciate the support of his friends and fans and look forward to a wonderful evening of music and friendship.”

Tickets go on sale to the general public on Friday, December 19th at 12 noon at MarqueeConcerts.com, SmoothJazzNewYork.com, Ticketmaster.com, and the BB King Blues Club box office. General admission seats are $45 in advance ($55 day of show, if available) and VIP booths for 4 and 6 can be purchased at $65 per ticket in advance. (Must purchase full booth; VIP tickets will be $75 day of show, if available.)

About Marquee Concerts
Marquee Concerts, one of the premier concert promoters in the Northeast, produces hundreds of events across all spectrums and genres. Marquee is constantly researching new music trends, recognizing today's up-and-coming entertainers, and expanding upon existing business relationships to put on the best shows possible and remain a competitive mainstay in the concert promoter’s industry. Learn more at MarqueeConcerts.com.