“Prosecuting the Satanic War” from Christian Faith Publishing author Jerry Hopper is a compelling look at the fight between good and evil and mankind’s role within this ongoing battle. 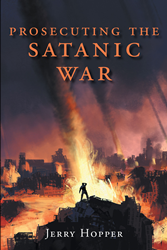 Hopper shares, “This book is about the invisible war that existed behind every visible war throughout history. Its combatants are God and His holy angels versus Satan and his evil angels. It also involves man who is at the center of the battlefield.

“The goal of each kingdom (God’s and Satan’s) is to possess the earth and mankind who occupies it. The statement ‘to the victor belongs the spoils’ is truly involved here.

“All mankind is involved in this conflict. Let us take our place in the ranks of God’s army. Remember, God fights. God wins.”

Published by Christian Faith Publishing, Jerry Hopper’s new book will challenge and encourage readers in their faith as they consider the ultimate battle’s effect on the world.

Hopper shares in hopes of condemning the forces that threaten the souls of humanity and to raise awareness of the need to be resolute in faith.

Consumers can purchase “Prosecuting the Satanic War” at traditional brick & mortar bookstores, or online at Amazon.com, Apple iTunes store, or Barnes and Noble.

For additional information or inquiries about “Prosecuting the Satanic War,” contact the Christian Faith Publishing media department at 866-554-0919.