Jerry Key’s newly released “War Stories & Other Lies” is a motivating memoir of a life’s journey driven by wisdom, positivity, and faith

“War Stories & Other Lies” from Christian Faith Publishing author Jerry Key is a brilliant narrative that shares the life of a man who enjoys the challenges and misadventures of the world and the values he had embraced after the struggles. 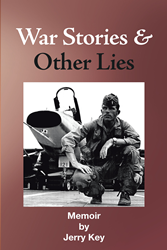 “War Stories & Other Lies”: a profound testimony of a triumphant journey throughout the battles of the world and life itself fueled with a strong mind, heart, and spirit. “War Stories & Other Lies” is the creation of published author Jerry Key, a writer who enjoys woodworking and is involved in several community activities. He currently lives on a small farm in southwestern Tennessee with his wife who was a high school classmate.

Key shares, “Born August 1944, shortly before the end of WWII, Jerry was always fascinated by rumors of peace and prosperity. Unfortunately, he had siblings and cousins that constantly cracked him on the head and stole his allowance. He entered elementary school (called grade school in the old days) and soon found many friends that also cracked him on the head and stole his money. He led a life of poverty so severe he couldn’t even afford a camera to take pictures of his measly existence. He survived by eating beans and potatoes and cornbread nearly every meal. Finally, he entered Valley High School and soon rose to the top of his class (well, pretty close as vice president) and prospered by using all the techniques used on him to crack heads and steal the money of his classmates.

“College during the 60’s was a learning experience. Mostly he learned he didn’t want to work all his life, so upon graduation, he joined the USAF and became the (self-proclaimed) world’s greatest fighter pilot. After a year’s vacation in Vietnam and three years in England, he settled in Albuquerque, New Mexico, where he continued to fly fighter planes for the New Mexico Air National Guard and owned a couple businesses. He became a real estate tycoon (i.e., slum lord) and finally went to work for Continental Airlines as a pilot, retiring in 2004 with over fifteen thousand hours flying time. He now is a land baron (thirty acres) and lives on his estate near Savannah, Tennessee, with his wife and dog. Unfortunately, his current wife cracks him on the head and takes his money. Some things in life never change.

“In this surprisingly funny memoir, writer Jerry Key looks back at his life and offers a comical and uncanny view from childhood mishaps to retirement some sixty years later, but he reveals valuable life lessons that apply to us all. Most of all, this book provides a journey of living life and enduring life experiences with the insight of wisdom and a positive outlook.”

Published by Christian Faith Publishing, Jerry Key’s new book is a stirring tale that gives the readers an inspiring look into the life of the author as he recounts his years of growing up in poverty to piloting planes that took him to the skies.

View a synopsis of “War Stories & Other Lies” on YouTube.

Consumers can purchase “War Stories & Other Lies” at traditional brick & mortar bookstores, or online at Amazon.com, Apple iTunes store, or Barnes and Noble.

For additional information or inquiries about “War Stories & Other Lies,” contact the Christian Faith Publishing media department at 866-554-0919.