“Breaking Seven” from Christian Faith Publishing author JHieb is a gripping narrative that follows the lives of two individuals who find comfort and grace on their path to redemption, despite their differences. 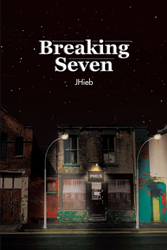 “Breaking Seven”: a heartwarming book that shares the circumstances of a man of God and a hopeless woman whom each discerns God’s grace during storms in life. “Breaking Seven” is the creation of published author JHieb, a dedicated Christian writer.

JHieb shares, “This is a story that shows the true power of Christ’s forgiveness over sin. These characters are vivid in their humanity, and their pain is felt across the pages.

“David is a wanderer with the ability to lift other’s suffering and place that mantel upon himself—a man who tirelessly works to ease the souls of others while never allowing himself to be free from the crippling weight of guilt.

“April is a street-worn junky who has abandoned herself to a life without hope, doing whatever it takes to live one fix to the next—a woman without family, a home, or a future.

“When they met, neither of them ever expected God to move so powerfully within them. No longer alone, each finds that the other may be what is needed to face truths neither could face alone. For one, it’s an introduction to a God never before known, and for the other, it’s a chance at healing.

“Can an exhausted man of God and a hopeless woman of the world work together to overcome a force from the past that threatens David’s future?”

Published by Christian Faith Publishing, JHieb’s new book witnesses a life filled with tribulations that test faith and strengthen the resolve to thrive in God’s wisdom and fortitude.

This book exudes with heartfelt circumstances that prove the benevolence of God that graces life with fulfillment and clarity from mundaneness.

Consumers can purchase “Breaking Seven” at traditional brick-and-mortar bookstores or online at Amazon.com, Apple iTunes store, or Barnes and Noble.

For additional information or inquiries about “Breaking Seven,” contact the Christian Faith Publishing media department at 866-554-0919.