Mighty Distributing System is pleased to announce that two of its Jiffy Lube-affiliated partners have added new Mighty franchises to their company portfolios. 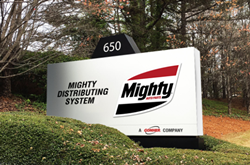 It is gratifying to have two of our leading Jiffy Lube partners add new Mighty franchises to their business portfolios. Midwest Distribution Group and Multi-Management are both led by seasoned professionals who understand the franchise model.

Midwest Distribution Group is headquartered in Indianapolis and is comprised of 48 Jiffy Lubes, six Tuffy Auto Repair centers, and five Mighty Auto Parts franchises. Their flagship Mighty franchise in Indianapolis was licensed in 2006 and won Mighty’s coveted Franchise of the Year award in 2017. From 2009 to 2017, they added three more locations in Dothan, Alabama, Orlando, Florida, and Pensacola, Florida. Their most recent addition, and fifth Mighty franchise, is based in Ft. Wayne and will include a distribution territory throughout Northeast Indiana.

Midwest Distribution Group’s president, Steve Sanner, said, "We are excited to officially add the Northeast Indiana territory to our group. For many years, we have been servicing our Tuffy location and six Jiffy Lubes in this market from our Mighty warehouse in Indianapolis, but we decided it was time to license the territory, hire a salesperson, and focus our full efforts on expanding the outside business. We can't wait to see the results of our efforts over the next few years!”

Based in York, Pennsylvania, and led by president Bob Falter, Multi-Management, Inc. operates 60 Jiffy Lubes as well as a top-five ranked Mighty franchise. They recently expanded by acquiring the license rights to distribute Mighty products in an adjacent territory. Their second franchise, Mighty of Eastern Pennsylvania, will now service the Greater Philadelphia area.

Bob Falter stated, “We have a great relationship with the Mighty Team in Norcross. While we had never contemplated a second franchise, the opportunity to acquire a contiguous market such as Philadelphia was one that certainly made sense for us at this time. Our Mighty team is energized and ready to conquer this market. We look forward to a mutually beneficial partnership for years to come.”

Ken Voelker, Mighty’s CEO said, “It is gratifying to have two of our leading Jiffy Lube partners add new Mighty franchises to their business portfolios. Midwest Distribution Group and Multi-Management are both led by seasoned professionals who understand the franchise model. Their decision to expand and invest in additional franchises validates the benefits of Mighty’s quick service program.”